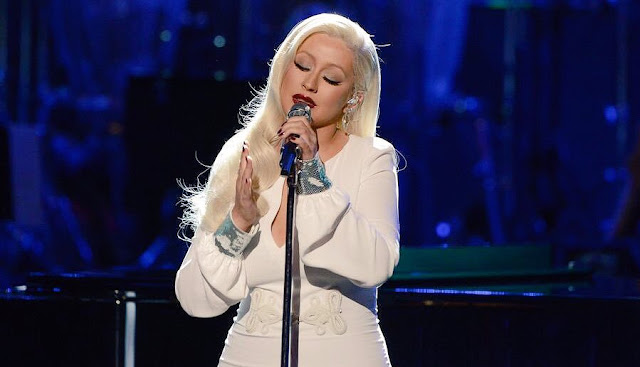 Fuck well, I really don't like taking the time to write something that doesn't, at the present time, pertain to news on the new album.

But unfortunately, here I am.

Today was a day to rejoice at the fact that our girl had been hand picked from a sea of artists, that could have performed a tribute to Lena Horne, but given her stellar track record with soulful tribute, Xtina was the obvious choice.

The events that follow, sadly, overshadowed her brilliant rendition of "Stormy Weather" at the "Take the Stage" event.

Ric Wilson who is an artist, a good one at that, expressed his opinion (quoted tweet) on Xtina's presence at the #TaketheStage event, in which I responded with a #Circles inspired tweet:

Which I obviously don't agree with, bring up the fact that Xtina is not Black should have kept her from performing tonight, which I think is fucked up. Since I took the time to listen to his music, I could say that he is not familiar with anything Xtina. We know that she's been praised by legendary soulful women and men like Etta James (asked to sing at the funeral), Aretha Franklin, Patti LaBelle (said no one should touch her songs but our girl), Whitney Houston (called X's rendition of "Run to You" the best, behind her owns), etc...

Now, the reason why I included every single color available for the "FUCK YOU" finger is because we (#Fighters) come in every fucking color. Its our job to educate the people who criticize her with facts, of any sort, to validate that their decision to  go with Xtina was the right one.

Then, I go and see tweets from #Fighters, who I consider great friends, as well as real/core fans talking amongst themselves that we, Fighters, were bashing Ric for his initial tweet (above), and I felt it necessary to write a quick apology to smooth this over. Not for own benefit but so that when people she or hear Xtina's name they won't quickly feel like she has certain notoriety.

Sorry. Please don't consider ppl like that @Xtina fans. They don't represent nor reflect who we, her core and true fans, are. @RicWilson 💕 https://t.co/50GX1My1yf
— Christina Aguilera (@AguileraOnline) January 13, 2017

I don't have to see the comments to know how fucked up some "fans" can be when they feel like their QUEEN has been disrespected. If that was the case,  we'd all have over 1 million tweets defending Xtina because we know that she isn't a favorite among the twitter world.

I'm not going to apologize or recant, because various, self-proclaimed, #fighters decided to unfollow and tweet their new found dislike for AO:

@AguileraOnline @RicWilson @xtina @ABC clearly you are as DELUSIONAL as I thought you were
— Christina Aguilera (@XtinaAguilera_1) January 13, 2017

AO is where it's at because I go my best to keep Xtina's name in the good graces of people. AO is going to be turning 8 this year and within those 8 years I have never attacked or showed any type of disrespect towards someone because of their personal opinions about Xtina.

If you guys haven't noticed AO's profile picture is not a personal selfie but one of Xtina. When you search "Christina Aguilera" on twitter our account happens to show up before Xtina's official account, leading some people to believe that we are Xtina. Like this gentleman;

@AguileraOnline you were absolutely wonderful as always. So glad you were a part of such a historical piece of history. You Rock!
— Otley Bethel (@yeltob) January 13, 2017

Then this tweet made me let out laugh that echoed across the city that I live in:

I'm sure this person doesn't even know I have a twitter account where I freely speak my mind. Now, the biggest difference is that, I'm not hiding behind a picture of Xtina. My profile picture is a picture of myself.

You may ask why that makes a difference, well, if you feel the need to defend Xtina, DO IT... but have the balls to have your face as your profile picture so that when people mention "Christina Aguilera fans" it is in a positive way.

Apparently XtinaRise saw an extended clip because "it" (lol) said:

@AguileraOnline @xtina @RicWilson you're not gaining any praise with this as you are hoping by tweeting this
— Christina Aguilera (@XtinaRise) January 13, 2017

I check and BITCH WAS NOT SAID.

Then by an angry "fighter", I'm using that term loosely, said I should fact check his hate for Xtina so I did. This is what I saw.   Are you guys okay with this? Do you guys seriously think Xtina would approve and be proud of "us" acting out in  this manner?

FUCK NO, SHE WOULDN'T!

I didn't write this to prove anything to anyone. At the end of the day I know and her team knows where I stand in regards to my love and respect for her. But I did it to keep irrelevant people from smearing AguileraOnline's name and reputation to other fighters who haven't come across our site and twitter account.

For those who unfollowed, Xtina and her real fans are better off without you. Like Xtina says, "pay no mind to the negative kind... ", why? Because, she's here to stay.