WHITNEY TRIBUTE WILL NO LONGER BE TELEVISED 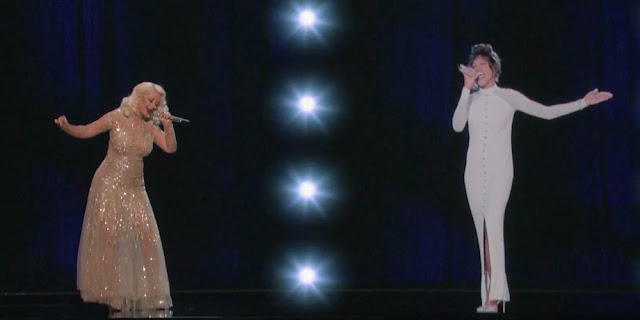 "I was honored that the Houston family asked me to perform a duet with the legendary Whitney Houston. Sadly, the technology could not meet up to the talent that Whitney possessed.I do know in time the performance the fans and I have been hoping for will come to life."

As fans our duty is to support and help @Xtina in any way possible. We will NOT be sharing any links to the leaked footage. @NBCTheVoice ❤️
— Christina Aguilera (@AguileraOnline) May 19, 2016

Fucking shit man, this pisses me off. Sorry guys, but I'm a little heated right now. I understand that we're all very eager to get something, anything new from Christina. But do you really think that sharing links to watch or download anything leaked is helping the situation? Well, if you're not sure... the answer is no.

The "Whitney Estate" has since decided to pull the plug on airing the performance exclusively to ET.

Read the statement below: 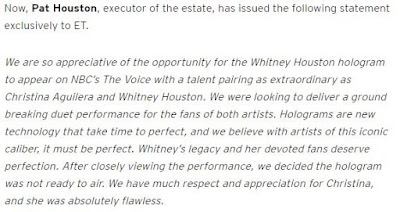 Am I surprised that the performance has been pulled from being televised this upcoming week?

KEEP THE FOOTAGE TO YOURSELF IF YOU ALREADY HAVE IT. @NBCTHEVOICE STILL HAS THE POWER TO CAN IT. https://t.co/xMXSLLLrUx
— カルロス・センテーノ (@KarlosACenteno) May 19, 2016

It does say that they were the Houston family was unhappy with how the hologram looked but think about... why would they decide the cancel the performance on the same day that it leaked? They have had more than enough time to preview the tape and straighten things out, so why would they decide to make an announcement today of all days?

We can't do much now, but wait and see if there will be an official announcement from either Christina's camp or The Voice.

But the only plus side to this horrible situation is that Alisan and Christina now have the opportunity to choose a Whitney song to perform as their duet. If it happens, that means we get a studio version of which every song they decide to cover.

Here's to hoping Christina and her team take the opportunity to still perform a tribute to Whitney.
Posted by AGUILERA ONLINE™ at 5:59 PM