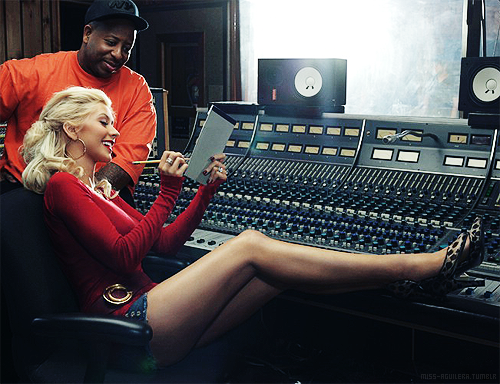 What else is cooking?

I just did a record with Ed Sheeran. We did some cool stuff – we were just experimenting in the studio, but it came out really good – so we got that going… I'm getting into the pop world again. I've started working with a group called Rizzle Kicks, who are very popular overseas – we did some cool stuff – and then I'm starting to work on Christina Aguilera's new stuff.

I was actually going to ask if you'd like to do more pop, as you didn't do much after Back To Basics.
I consider myself a producer, period. I'm not just a hip hop producer – I'm a producer. It doesn't matter what you bring to me, I'm gonna apply my tastes and passion for music to it – but most of it comes from me being a DJ. The fact that I DJ, that's really where I get the best focus on how to do things, because I'm very deep-rooted in being raised on music – before rap was even in existence. Because of that, I've always been up for any challenge – or what anybody ever brings me. So when Christina approached me about working on Back To Basics, I was immediately excited about doing it because I want to show that I'm beyond hip hop – even though I'll apply a hip hop flavour to it because that's what made me my name.

She let me just do me. She didn't really give me a lot of instructions. She just pretty much told me what she was looking for. And then some of it was just experimentation. She would go, ‘Ooh, I like that, lay that down’ – and I'd play it. TheThank You record, I was playing around with a friend of mine's daughter, showing her how to scratch on the turntable. She started cutting the beat on time and I said, ‘Yo, keep that going’ – and I got on a keyboard. Christina happened to walk in and go, ‘What is that?’ I'm like, ‘Oh, we're just playing around’. She goes, ‘I like that, lay it down!’ – and we put it on tape [laughs].

Posted by AGUILERA ONLINE™ at 1:10 PM