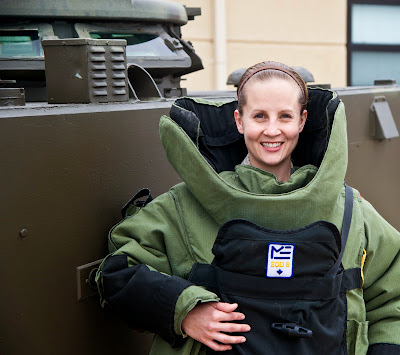 This is the first in a series for Women's History Month, highlighting Airmen who go above and beyond in male-dominated career fields.

Being in a male-dominated career field may seem intimidating or even be tough at times, but for Staff Sgt. Rebecca Hennen, that doesn't hold her back.

As a 60th Civil Engineer Squadron Explosive Ordnance Disposal technician team lead and only one of 50 females in the career field, Hennen said she doesn't let her gender define her.

"It's no secret that men are naturally faster and stronger," Hennen said. "I just push myself that much more, mentally and physically."

"It can be very intimidating to be in this career field," he said. "Everyone is very competitive, but Hennen knows how to hold her own with us."

As team lead, Hennen said it's crucial for her to listen to her team and not be strong headed.

"Women exemplify compassion better than men," she said. "It's crucial for me to demonstrate that and listen to my team needs."

Known as adrenaline junkies, Hennen has deployed twice so far, once to Iraq in 2009 and again in 2012 to Saudi Arabia.

"I love deploying," she said. "I really think of our mission as being overseas. It's all about protecting people, property and resources from hazardous devices. That's really when you get the experience."

Lowe said many people don't think of women in the career field because they are out on the front lines.

"It's because we are classified as support and not a combat Airman," he said.
Hennen joined the career field at the age of 21, looking to do something more exciting in her life.

"My brother had just graduated Army boot camp and that really sounded exciting for me," she said. "He convinced me to go into the Air Force, so I met with a recruiter. They were really pulling for people to join the EOD career field then. I loved the idea of blowing stuff up. It was one of the best decisions I've made."

Hennen said she gets her inspiration from pop and R&B singer Christina Aguilera.

"She's true to herself," she said. "She tries new things and helped empower women."

As a woman, Hennen hopes to be like Aguilera.

"I want to be able to empower women who are struggling to find themselves so they can do what they want," Hennen said.

Posted by AGUILERA ONLINE™ at 7:01 PM