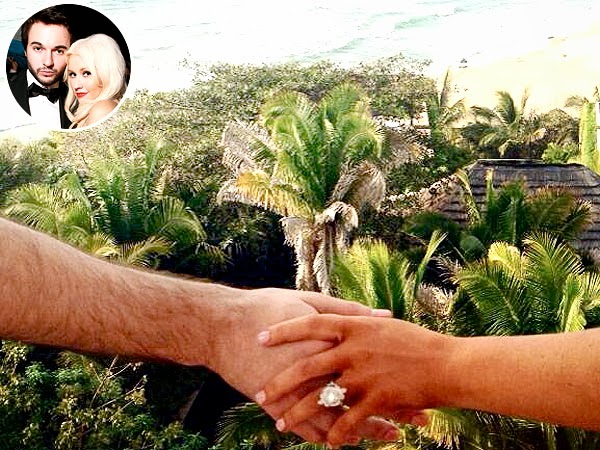 Christina Aguilera had a very romantic — and very sparkly — Valentine’s Day, when her love of three years, film producer Matt Rutler, proposed in Hawaii with an enormous, elaborate engagement ring, a photo of which Aguilera shared on Twitter Friday. “He asked and I said … ” she wrote, letting the sparkler do the talking for her.

But this was no spur-of-the-moment proposal. According to a source, Rutler has been designing the ring for quite some time, carefully choosing each stone to represent different facets of his relationship with Aguilera.


“Matt spent over a year designing the ring with the ring designer to represent their three-year journey together as a couple,”


“He has been planning this for a while and was just waiting for the right time — the ring has been done for months. Every single placement of each stone has a reason and meaning.”


“The actual band weaves and intertwines [the] diamonds. Every connecting criss-cross symbolizes how their paths crossed … the ring narrows at the base [to] reflect how their bond continues to grow closer and stronger over time,”

the source says, adding that some of the most special features of the ring aren’t visible to others.


“There are nine special multi-color gemstones that you cannot see. They all symbolize something meaningful to the couple. Christina is very spiritual and having the stones touch her actual skin will emit positive energies surrounding her at all times. They represent things like love, protection and healing.”

As for the unique, vintage-feeling setting of the ring? Rutler was inspired by pieces he knew Aguilera already adored.


“He took two of Christina’s favorite rings … to design something that incorporated [both designs] into one,”


“Similar to both their lives coming together as one.”

Source: People (Magazine)
Posted by AGUILERA ONLINE™ at 12:56 AM