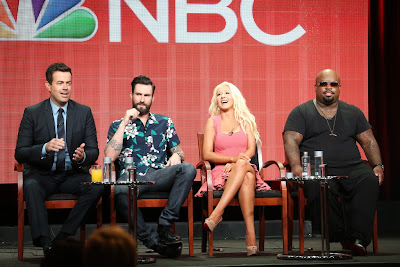 Carson Daly confirmed in an interview with Huffington Post TV that Christina and Adam's fiery feud has lost its spark since season 5 of 'The Voice' (which premieres at 8pm on Monday, September 23rd, EST, on NBC) saw the return of the original quartet of coaches. Carson further goes on to say that season 5 is the best season yet because it is as if Christina and Cee Lo Green never missed a beat, despite both of them sitting out for season 4.

I, too, think season 5 is slated to be the best season of NBC's hit singing show, because of Christina Aguilera's recent rejuvenation and revival she has experienced overall. She looks like she is ready and raring to go after taking time for herself to refuel. Not to mention, I am SO looking forward to watching her mentor #TeamXtina and show them how it is done. It keeps gettin' better (sic).

Source Credits: HuffPostTV
Posted by AGUILERA ONLINE™ at 9:56 AM