[NEWS] OK! MAGAZINE MAKES CLAIM CHRISTINA AND BRITNEY ARE BATTLING ABOUT THEIR BODIES 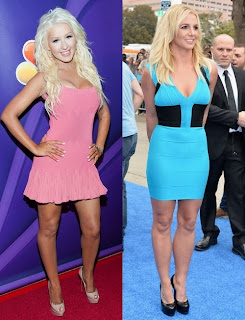 A few weeks ago, it was falsely reported Mariah Carey and Christina were allegedly battling each other about who has the better body, but this week, the "writers" over at OK! Magazine are recycling old rumors rubbish and are laying claim that Christina is now battling it out with Britney Spears about the same story.

You would think by now Christina would be a world-class cage-fighter from all these fake stories floating around speculating she is fighting with all these people.

When you're Christina Aguilera and you've got it ALL, everyone else is pitted against you. Seriously. Who hasn't Christina been pitted against? It has to be excruciating to have to endure that endless excrement. Justin Bieber was enough for me.

Evidently, this latest bodily combat came about when both Christina and Britney showed up at different red carpets this past week in Los Angeles. It should have been obvious to the editors over at OK! that Britney's appearance at the opening night of 'The Smurfs' sequel had a blue carpet, but I'll just chalk it up as laziness on their part.

As you would accurately assume, this alleged attack between the two A-listers is also absolutely absurd. The GossipCop gurus once again close this case of crap.