[NEWS] CHRISTINA AGUILERA RETURNS TO 'THE VOICE', REFRESHED AND REJUVENATED 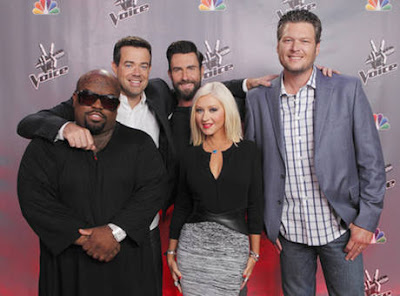 The Voice prides itself on being a reality competition show devoted to discovering new talent, but it’s most noteworthy star to date has to be pop diva Christina Aguilera. This blonde bombshell took off Season 4 from the show to regroup and recharge, but now the superstar is back and looking better than ever.

Wetpaint Entertainment caught up with Xtina and the rest of the coaches at the NBC summer press junket where the “Beautiful” singer was looking more trim than ever. And when she was asked about her drastic weight loss, she had a surprising secret to share.


“I know you're going to think this is total B.S. when I tell you this, but my mission in taking the time off was getting back to things that are outside of inspiring me on camera,” she said. “It was about getting back to my roots and my being a mom, spending time at home. My son lights up my life, and it's hard to go to work and be separated from him and work long hours, and that's something that these guys don't really know yet, and there's a different thing when you're a mom. It's just a little more emotional and it's hard, and I needed to be with my son for a minute.”

The typically private star even alluded to her painful divorce from Jordan Bratman, the father of her son, Max. She started The Voice less than a year after filing for divorce, ending an eight-year marriage.


“I kind of came off of 2010,” she said. “It was a little bit of a hard time in — you know, we go through rocky moments in our lives, and especially being under a microscope and I've always been a risk‑taker and whatnot.”

The diva admits that part of her reason for leaving the show was to rejuvenate a temporarily dull career.

“I just — I was a little bit bored, actually, and I needed to have a moment to re-inspire myself and reconnect,” she said. “I know it's in there because my gut is to sing from my friggin’ heart and soul. And that's what I got in this for. I wanted to gain a different perspective and find happiness with all this stuff again, and I did. I did.”


Xtina thinks that her time away will allow her to be a better coach and mentor to her contestants in Season 5.


“I'm spreading the love,” Christina continued. “I think the boys feel it. I came back. I'm like, ‘I just want to laugh with you guys and have fun.'"

Are you excited for Christina’s return to The Voice stage? Tell us below!