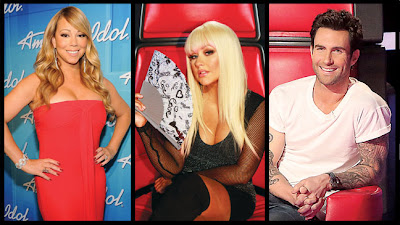 This story first appeared in the April 12 issue of The Hollywood Reporter magazine. The specialized skill of judging talent is not one every megastar can manage, but for those who succeed, the pay is handsome. Just ask Simon Cowell, who pockets north of $35 million a year as judge and co-creator of The X Factor, or radio jock Howard Stern, who brings in a reported $15 million salary for America's Got Talent. It's a good gig for guys who, unlike the other club members, don't have music talent to fall back on.

Mariah Carey, American Idol The diva co-wrote/co-produced dozens of songs from a catalog of 60-plus singles. Album sales: 61.5 million Most recent hit song: Her 2011 collaboration with Justin Bieber on “All I Want for Christmas Is You (SuperFestive!)” Grammys: 5 Ratings impact: Since Carey joined Idol in season 12, the Fox show has seen an 18 percent drop in ratings.

Adam Levine, The Voice He’s the full-time frontman for rock-pop band Maroon 5 and an actor/heartthrob. Album sales: 9.5 million Most recent hit song: The platinum-selling “Daylight,” released in November, is No. 12 on Billboard’s Hot 100. Grammys: 3 Ratings impact: One of two original coaches, he’s kept a loyal legion of viewers (even while touring!) and hosted SNL.