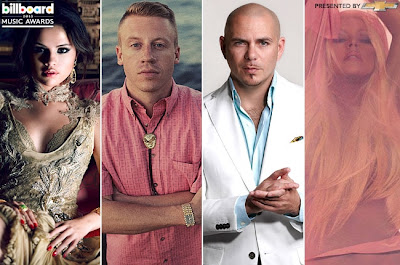 The party's just starting at the Billboard Music Awards.

Pitbull, Christina Aguilera, Macklemore and Ryan Lewis, Selena Gomez, the Band Perry and Kacey Musgraves have joined the star-packed performance lineup for the May 19 ceremony, which already includes Prince, Justin Bieber, Taylor Swift, Bruno Mars and Miguel. The latter quartet will join Pitbull and the Band Perry in vying for the Milestone Award, a fan-driven honor that one voter will get to present at the show alongside Cee Lo Green.

Swift, fun. and Maroon 5 lead the finalists at this year's event, with each included in an impressive 11 categories. Rihanna competes in 10 categories, including Top Artist against Swift, Maroon 5, Justin Bieber and One Direction, while a pair of younger artists -- Carly Rae Jepsen and 1D themselves -- are finalists in nine and eight categories, respectively.

Among other awards, the ceremony will honor Prince with the Billboard Icon Award. Fan voting for the Milestone Award, sponsored by Chevrolet, is open at Billboard.com/milestone. The show will air live from the MGM Grand Garden Arena in Las Vegas on ABC, with "30 Rock" alum Tracy Morgan set to host and Don Mischer to produce.

At last year's event, Adele dominated with twelve awards, including Top Artist, while LMFAO followed with six nods. The show featured over 15 live performances from some of the biggest names in music, including Katy Perry, Kelly Clarkson and Usher, and resulted in a ratings win for ABC, attracting its second-largest audience since 2003.

Billboard Music Awards finalists were based on key fan interactions with music, including album and digital singles sales, radio airplay, touring, streaming and social interactions on Facebook, Twitter, YouTube, VEVO, Spotify and other popular online destinations for music. These measurements were tracked year-round by Billboard and its data partners, including Nielsen Entertainment and Next Big Sound.

Stay tuned for more announcements on performers, presenters and more for the May 19 airing of the 2013 Billboard Music Awards on ABC.

Source: Billboard
Posted by AGUILERA ONLINE™ at 7:15 AM