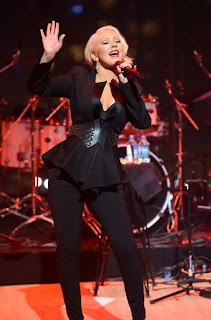 A slew of celebrities descended upon New York's Lincoln Center on Tuesday night (Apr. 23) to celebrate the TIME 100 list of the Most Influential People in the World, and musical artists like Frank Ocean, Justin Timberlake and Miguel were among those gracing the red carpet. Christina Aguilera -- who was honored in a short essay by fellow diva Celine Dion -- was also in attendance, looking remarkably svelte in a black Victoria Beckham dress.

The 32-year-old singer and "Voice" coach showed off a slimmer figure while sporting an unfussy look that was highlighted by some Lorraine Schwartz bling. Aguilera also performed "Lady Marmalade" during the star-studded ceremony.

Watch Pitbull, Christina Aguilera 'Feel This Moment' Around The World

"The first time I heard Christina Aguilera sing, I was totally blown away," Dion wrote in her essay, released in the annual TIME issue earlier this month. "Without a doubt, she’s one of the most talented artists the world has ever seen and heard, and I think she’s going to continue to amaze us for many, many years to come."