In case you were worried that Nickelodeon's 26th Annual Kids' Choice Awards wasn't enough of a party, things just got a whole lot rowdier.

Pitbull and Ke$ha will serve as the night's musical performers. The Miami rapper will be joined by Christina Aguilera to perform their track "Feel This Moment," while party girl Ke$ha will be on hand performing her Warrior single, "C'Mon."


"Can't wait to play the Kids' Choice Awards for the first time," Pitbull said in a statement. "Look forward for fans to also see the first performance of 'Feel This Moment' with Christina Aguilera. It's gonna be fun, dale!!!" 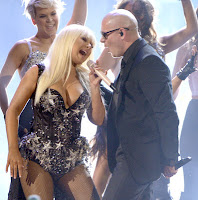 Ke$ha was equally excited about the booking, adding, "Kids' Choice is always one of the most fun awards shows of the year. I can't wait to come out and party with all of my animals!!!" (Ke$ha will be back on the small screen in April as the star of her own MTV documentary series "Ke$ha: My Crazy Beautiful Life.")

Celebrities from across all entertainment platforms — ranging from music to TV to movies to sports — will try to take home a blimp at this year's show, which will be hosted by "Transformers" star Josh Duhamel. Nominees in a range of categories include Taylor Swift, One Direction, Selena Gomez, Justin Bieber, Miranda Cosgrove, Kristen Stewart, Will Smith and more.

Fans can vote in all categories across all of Nick's digital platforms. A complete list of nominees and additional information can be found on Nick's website. The show will go live at 8 p.m. ET from USC's Galen Center in L.A. on March 23.