Pitbull and Christina Aguilera have released a behind-the-scenes picture from their new music video. 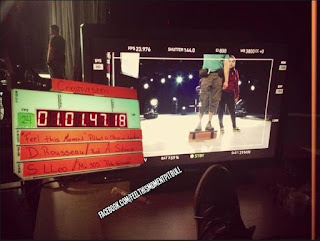 An image of the clip for their collaboration on 'Feel This Moment' was posted on Facebook.

The track marks the fourth single from Pitbull's latest album Global Warming, following 'Don't Stop The Party', which peaked at number seven in the UK and 17 in the US.

The Cuban rapper previously unveiled his own 'trap' remix of will.i.am and Britney Spears's 'Scream & Shout'.

Meanwhile, Aguilera recently picked up the 'People's Voice' prize at this year's People Choice Awards, where she performed 'Blank Page' from her latest album Lotus.

Listen to 'Feel This Moment' below:
Source: Digital Spy