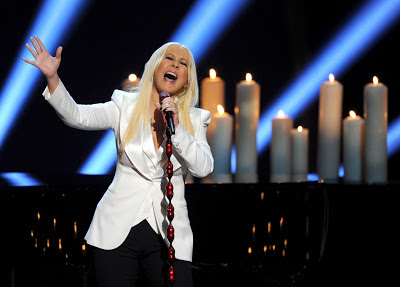 It was a simple and unfettered performance, one that allowed Xtina’s powerhouse voice to command the attention of every person in the auditorium.

Even though her voice was a tiny bit strained, she still sounded better than most on their best day.

Power ballads like this are Xtina’s forte, and she reminded us why we loved her so much in the first place. While her “comeback” album ‘Lotus’ may have flopped, if this song finds its audience, the album could get a second life.

After performing the song, she was handed the People’s Voice Award, and in her acceptance speech, she admitted that was the first time that she sang that song without crying. She also confessed that singing is the only time she feels like she is truly herself, and that she finds a home in music. It was a touching speech, and an entertaining performance.

Curiously enough, she gushed about ‘The Voice’ producer Mark Burnett in such a way that made us think that it was a calculated attempt to make sure she gets her chair back on the show and doesn’t lose it to Shakira. Xtina is on hiatus for Season 4, with the Latin dynamo filling in for her.