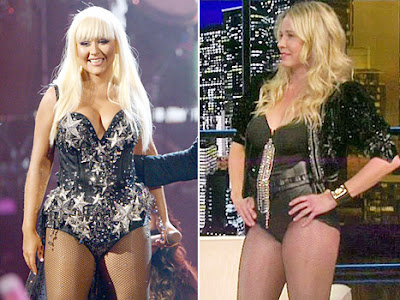 Imitation may be the sincerest form of flattery -- but "flattery" wasn't Chelsea Handler's intention when she donned a black bustier bodysuit, a la Christina Aguilera, to chat with Aguilera's fellow Voice mentor Blake Shelton on Thursday, Nov. 29.

Handler, 37, wore the skimpy getup as part of a gag to make the country star feel more at home on her late-night talk show, Chelsea Lately. Her sidekick Chuy appeared in costume, too -- as Voice mentor Cee Lo Green, complete with a bald cap and a bright-red feathered coat.

"I wanted to dress like Christina to make you more comfortable," the host told a surprised Shelton of her fishnets and leather leotard. "I wanted you to feel like you were at your own job."

The "Honey Bee" singer -- who makes a cameo on Aguilera's new album, Lotus, in the song "Just a Fool" -- was stunned but more than a little amused by the joke.

"Happy Christmas to me!" Miranda Lambert's husband said, laughing. Later, he told the host, "I love you. I love you so much."

Source: Us Magazine
Posted by AGUILERA ONLINE™ at 10:22 AM