Calling all Unbreakable Flowers! Christina Aguilera's music video for her hit single, 'Your Body', has made it to Round 3 in Fuse's battle for #1 Video of the Year. She knocked out two pop-tarts in the first two rounds.

In Round 1,  Katy Perry was putting up a great fight but it wasn't until the last couple mins that Christina came in swinging and came out victorious. In Round 2 Christina went up against Rihanna, to our surprise she didn't put up much of a fight. Christina came out of that round on top.

But now it's a different story, in the beginning of Round 3 we had a 30% - 40% lead on Demi Lovato but as you can see in the the screen shot below, we had fallen way back. 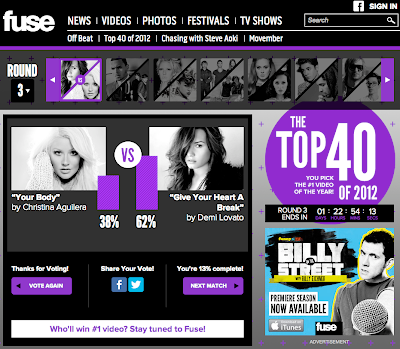 Make sure to spread the link for the poll on every social media platform you have (i.e. Facebook, Twitter, and Tumblr).
Posted by AGUILERA ONLINE™ at 2:25 PM