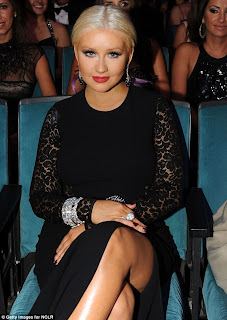 Aguilera was planning to fly from Los Angeles to New York to promote The Voice this week. When she called her manager, Irving Azoff, to ask how she could help Hurricane Sandy victims in some way, he wasn't even sure if she could make it into the city. "She's already talking about 'how can I do something?' and coincidentally we're trying to figure out if she's even going to do her New York trip," Azoff says.

The manager and his team were frantically working on details when Paul Telegdy, NBC's president of alternative late-night programming and specials, called an hour later. "We're going to try to do this telethon," he said. "You think Christina's going to be interested?" Aguilera quickly accepted a singing slot during Friday night's benefit for the American Red Cross, and the post-storm travel plans came together.

"It's all hands on deck and everyone's in," Telegdy says in a phone interview Thursday. "People are working through the night dealing with logistics. Putting on a show dealing with artists of this caliber is very difficult. Frankly, there are substantial transport issues."

The show will take place on the sixth floor of NBC's "30 Rock" building, in the Dr. Oz studio down the hall from Late Night With Jimmy Fallon. Plans are coming together so rapidly that most stars don't even know whether they'll have a pre-show rehearsal or even an audience. Sting, who lives on the Upper East Side, plans to perform solo.

"I don't think there are many details. I've called them several times to say, 'Can you tell me anything?'" says Kathryn Schenker, Sting's manager. "Guess we'll find out."

The first star to accept a slot was Springsteen. "All I can say is that we were asked and said yes immediately," says Jon Landau, the New Jersey rocker's longtime manager.

Other stars, including Bon Jovi and Billy Joel, accepted without hesitation, too. Joel is dealing with hurricane-related damage at several of his properties throughout Long Island. "It was a no-brainer," says Dennis Arfa, his agent. Another source close to Joel adds that the native New Yorker contributed $500,000 to the Red Cross after the storm.

For Aguilera, the benefit is likely to be the first of many. "She'll do this one and more as stuff becomes available," says Azoff, executive chairman of Live Nation Entertainment and manager of the Eagles, Jimmy Buffett and many others. "The phones are ringing."