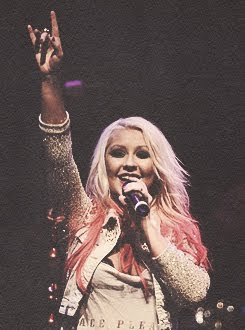 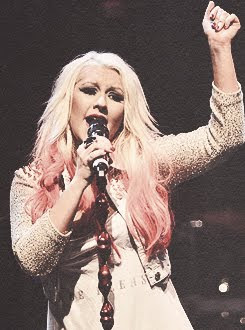 All work and no play? Not for The Voice judges. Last night, after fulfilling their coaching duties, Christina Aguilera, Adam Levine, CeeLo Green and Blake Shelton took to the stage at the House of Blues in West Hollywood to celebrate their Top 12.

The mentors kicked off a showcase of this season's talent with a performance of Cee Lo's Gnarles Barkley hit "Crazy," a medley of Queen classics ("We Will Rock You" and "We Are the Champions") and ended the set with the Rolling Stone's "Start Me Up".

The coaches, who hit the stage at 9:45 p.m., seemed to be unwinding from the pressures of eliminating eight contestants. Xtina, who donned leopard-print leggings and a white half-jacket, brought along a signature mic stand made up of bright red lips and strutted around the stage while Blake sipped on a red beverage between verses. Classic Blake!

Adam, who swapped the sweater he wore on the live show for a tight black T-shirt, scored the most applause from the packed House as he played drums during one number then showed off his rock star skills on the guitar for the rest.

And Team Adam had nothing but love for their coach when we caught up with them. We chatted with one of this season's front-runners, Amanda Brown, before the concert began and she filled us in on one thing we might not know about the Maroon 5 frontman.

"I didn't realize that Adam is this goofy!" She laughed. "We both get in to rehearsals and I'm extremely goofy and so sometimes it's a bit rough trying to get work done…But definitely I didn't realize Adam is as goofy as he is."

Which might explain too why the duo works so well together. "He's kind of pushed for me to be myself," Amanda—who promises an "interesting" performance next week—told us of her coach's advice. "The quirky, kind of goofy, energetic person that I am."

But the talented Ms. Brown may not get our vote—at least not if Christina has anything to say about it. After all 12 of the contestants performed at the House of Blues (with Christina Milian playing hostess), Xtina returned to the stage in a black hoodie and insisted she was the last coach standing for the night.

And she only had one thing to say as she stepped out with her arms around contestants Adriana Louise, Sylvia Yacoub and Dez Duron (the latter of whom earned some brownie points for looking fine in a pair of leather pants): "Vote Team Xtina!" Duly noted, Ms. Aguilera.