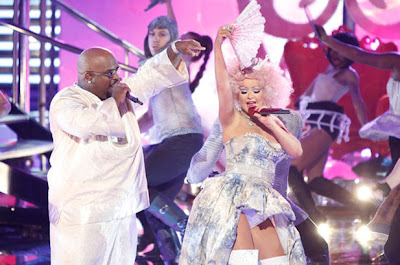 Taking the role of eliminator out of "The Voice" coaches' hands sits well with at least two of the stars in the oversized red chairs.

"My trust has been replenished," Cee Lo Green said after the Nov. 13 live show that saw the cast of singers whittle to 10 from a dozen. "It was exactly as I would have chosen."

Christina Aguilera, who said goodbye to her team's Adriana Louise, a waitress from Brooklyn, said "it's bittersweet. I'm a little thankful the pressure is not on my shoulders. There are such a lot of unique singers to there are no losers. They're all 'The Voice' in different ways."

The change in the system, which leaves the decision-making of who stays in the hands of voters and download buyers, felt significantly different from previous seasons in which the coaches found themselves on the spot deciding who to set free and who to save. In some cases, when a coach would be last of the four to make a selection, they were deciding a singer's fate within seconds.

Drawing out the "you are safe" element over the course of an hour -- performances from Aguilera and Green, Jason Aldean, and Green and Blake Shelton with their teams pleasantly broke up the tension -- gave the show a feel similar to its chief rival, "American Idol." It also puts the show in a position "X Factor" found itself in in its first American season -- with America judging, one of the coaches may find themselves out of the competition early as Paula Abdul did on "X Factor" last year.

"It's more important to give America their say," host and producer Carson Daly said after Tuesday's telecast. "If a coach has to take a back seat, so be it. We listened to what the research told us. Fans said 'we're your loyal viewers, relinquish some power.' I like the change. It says 'here's the talent. Get invested.'"

The talent on display Tuesday, however, was overwhelmingly coach-driven. Green opted for some late-period Elvis Presley garb while his team donned "Brady Bunch" fashions for the Bee Gees' "Stayin' Alive"; Shelton led his crew on a straightforward "Life is a Highway"; and Aldean, an old friend of Shelton's, performed "The Only Way I Know" with contestants Bryan Keith and Dez Duron.

Aguilera and Green were first up with an elaborate presentation of her "Make the World Move" that was a visual mix of Cleopatra, Marie Antoinette and a burlesque show. In rehearsal, Aguilera had a bit more bounce in her steps that shook the top of her dress close to wardrobe malfunction; the live presentation was calmer and less chancy.

Her next television appearance will be Nov. 18 at the American Music Awards and she promises a completely different presentation.

"There are so many different textures on (her new album) 'Lotus' that there's not one song that represents it," she says. "Every song is different in mood so for the AMAs, I'll do a medley of 'Lotus' tunes -- 'Army of Me,' 'Let There Be Love' (and others)."

Source: Billboard
Posted by AGUILERA ONLINE™ at 11:08 AM