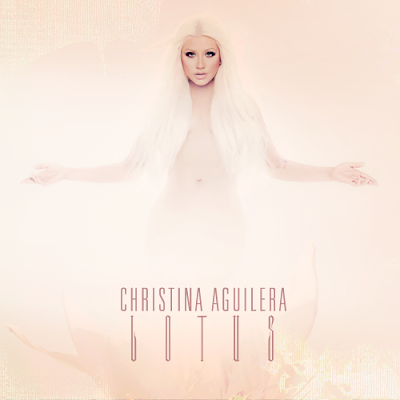 Christina Aguilera's latest album may be called "Lotus," but "Soldier" might have been an equally apt title.

With song titles like "Army Of Me" and "Cease Fire," military drums serving as percussion for tracks like "Around The World" and "Best Of Me," rampant references to being a fighter and plenty of ammo for her haters, Aguilera is on the warpath for reclaiming her pop stardom. And rightfully so, after a rough 2010 that saw her album "Bionic" flop and the cancellation of its accompanying tour; a divorce from husband Jordan Bratman; and the disappointment of her movie "Burlesque" and its Aguilera-heavy soundtrack. But after rebounding as a coach on "The Voice" and scoring her first No. 1 hit in a decade with the Maroon 5 duet "Moves Like Jagger," the stage has been set for a comeback.

As evidenced by lead single "Your Body," her first collaboration with Max Martin, Aguilera is back with guns blazing on "Lotus," a bright, shiny, and loud pop album that also features contributions from Alex da Kid (Rihanna, Eminem), Sia and Lucas Secon, as well as guest appearances from fellow "Voice" coaches Cee-Lo Green and Blake Shelton. The album finds Aguilera trying out piano ballads to club-ready dance pop to country to 90s rock, all with the subtlety of a chainsaw. It's full-throttle Aguilera as her fans want to hear, bringing her voice front and center where it was often muted on "Bionic." No note is left un-belted, no metaphor goes un-exhausted, and few verses feature just one Aguilera singing when three or four would be better. And yet, "Lotus" largely benefits from all the bombast - Aguilera hasn't sounded so fun and energized in years.

Which songs are the best on "Lotus?" Read on for Billboard's track-by-track review.


1.    Lotus Intro - Musically inspired by Aguilera's love of chill-out electronica (a demo of this song originally featured a sample of M83's "Midnight City" that ultimately wasn't cleared), this song uses the lotus flower as a symbol of Aguilera's rebirth "rise up / lotus rise / this is the beginning," she sings over tribal chants. Though she vows to "submerge from hurt, pain, broken pieces" and "leave the past behind / say goodbye to the scared child inside," the album will find she still has a few scores to settle.

2.    Army Of Me - Billed by Aguilera herself as "Fighter 2.0" in her Billboard cover story this September, "Army Of Me" finds Aguilera facing old adversaries with the "thousand faces on me," at one point asking, "So how does it feel to know that I beat you / that I can defeat you." With dance-pop production UK producers Tracklacers and Jamie Hartman, look for this track to get a single treatment soon.

3.    Red Hot Kinda Love - An effortlessly fun pop song that artists like Kylie Minogue and Britney Spears have specialized in recent years, "Red Hot Kinda Love" is perhaps the standout song on "Lotus." Aguilera is at her most relaxed and playful, with melismas kept to a relative minimum, letting the funky, sample-heavy production from Lucas Secon (a.k.a. "Lucas With The Lid Off") take precedence.

4.    Make The World Move (Feat. Cee-Lo) - A barn-storming party anthem emceed by the two "Voice" coaches, "Make The World Move" is backed by a brassy, big-band arrangement that would make the song an easy fit on 2006's 1940s-inspired "Back To Basics." But in the hands of producer Alex da Kid, there are plenty of modern flourishes to make it a hit for the 2010s.

5.    Your Body - Max Martin songs aren't exactly a vocalist's best friend, favoring giant melodies and hooks over histrionics. But leave it to Aguilera to find ways to inject her personality into this midtempo single, which really doesn't peak until the singer growls on the bridge "I think you already know my name."

6.    Let There Be Love - Another Max Martin-Shellback team-up, "Let There Be Love" goes straight for the clubs, riding a propulsive beat and chewy synths straight out of Martin's recent hits with Usher ("DJ Got Us Fallin' In Love Again," "Scream"). Aguilera seems keenly aware that the song's overly familiar formula that leaves little room for personality, which is why she spends the last minute wailing all over the place.

7.    Sing For Me - If "Army Of Me" is this album's "Fighter," then "Sing For Me" has aims of being a "Beautiful" for the next generation of Aguilera fans. With a thunderous chorus where Aguilera brings ironic depth to lines like "'Cause when I open my mouth / my whole heart comes out," "Sing For Me" is a gift to diehard Aguilera fans.

8.    Blank Page - Aguilera's previous collaborations with Sia were some of the most underrated tracks on "Bionic" ("You Lost Me," "I Am"), so it's nice to see the two reunite for "Blank Page," a song that will likely reach a much larger audience thanks to the elevated profile of both performers. A fiery piano ballad, "Blank Page" offers to wipe Aguilera's slate clean while trying to reconcile an old romance ("if I could do undo that I hurt you / I would do anything for us to make it through.")

9.    Cease Fire - This is around the time where the military analogies start to wear thin. "Cease Fire" finds Aguilera "alone on the frontlines," asking her lover to "stand next to me" and "throw down your weapons." A litany of other war references follow suit, unaided by a chorus that never takes off.

10.  Around The World - If "Your Body" finds Aguilera ready for love-making right here, right now, "Around The World" sees her looking to add a few passport stamps to the equation. Sadly, the second-verse reference to "Lady Marmalade" remains one of the few moments of fun on this otherwise tepid track.

11.  Circles - The biggest surprise on "Lotus" comes from the blaring, 90s riot-grrl chorus on this anti-haters screed, where Aguilera invites her haters to "spin around in circles on my middle middle finger," while mini-Aguileras chant words like "round and round" and "motherfucker" in childlike voices. Way more fun than "Shut Up" on the deluxe edition, "Circles" is Aguilera at her most unapologetic and all the more delightful for it.

12.  Best Of Me - Once again on the defensive, Aguilera shows signs of vulnerability on this powerful ballad before the military drums kick back in for the final chorus. A hopeful spin on a time where she was "knocked down and mistreated," "Best Of Me" sees Aguilera putting the events of 2010 behind her.

13.  Just A Fool (Feat. Blake Shelton) - You know how so many of the duets during the battle-rounds on "The Voice" just sound like two people shouting melodically at each other for three minutes? That's what Aguilera's giant, bloody stab at country soul with Blake Shelton sounds like, rattling the speakers and all the whiskey off the bar with an epic chorus that only increases in volume as the song progresses. In case you forgot that Aguilera was a singer with a capital S, this song is one last helpful reminder.