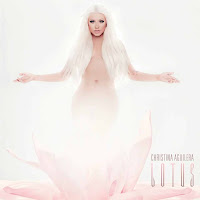 When you committ and devote yourself to coaching one of the world's biggest reality TV shows, helping out a fresh new batch of musicians start their careers, there's probably not loads of time left for you to focus on your own work and record your own album.

We imagine this is the problem Christina Aguilera faced when she signed up as mentor on The Voice USA. This album may have been two years coming, but she's finally back, feistier than ever, ready to release Lotus, her seventh studio LP.

Want to know what to expect from the album? Read on as 4music.com fills you in....

It's hypnotic, it's electronic, it's dark, it's serious. Christina is back. The track starts with some eery vocal chanting, before growing (just like a lotus flower would) into something more mature and developed. This is her rebirth. Are you ready for studio album number seven? Yes, let's go!

Favourite lyric: "Rise up lotus, rise. This is the beginning"

This track MUST be a future single. It captivates and excites right from the very start. There's a pounding drum beat, rocky guitars and a euphoric energy to the track, as Christina tells her ex that she won't be defeated by him. She may be heartbroken, but she's definitely not broken as a person. She's strong, resilient, determined and, above all, feisty! It's the kind of angry pop song that Kelly Clarkson would give her right arm for. If you like Christina Aguilera's Fighter, then you'll love this.

Here she comes, doing what she does best - being Dirrty. This raunchy pop number details Christina's attempts to win over a guy. She's fallen hook, line and sinker for him and says she won't stop until they get together. There's extra bass and a dirty underground feel to this song, ramping up the romance and sexual energy. We think you'll need a cold shower after listening to this. There's the usual Christina vocal acrobatics too. How can her voice be so effortless? Expect lots of "oooh", "aah", and "la la la" in her usual Mariah Carey-shrilling manner.

Favourite lyric: "Baby I'm burning up, you got that red hot kinda love"

Now this song is by no means the same as track three, but it's also by no means hugely different. It's a bit retro but a bit modern. It's a big underground but a bit mainstream. There's a heavy-impact chorus (which will have you singing along instantly) but the whole track just feels slightly lack-lustre following Red Hot Kinda Love. The sassiness and vocal power is still there, it just all sounds a bit similar (yet slightly inadequate) to the previous track. It's good, but not our favourite song on the album.

Favourite lyric: "Turn up the love, turn down the hate"

Do we even need to talk about this track? Watch the video here. It's amazing, that's all we need to know.

Favourite lyric: "It’s true what you heard, I am a freak, I’m disturbed"

6. Let There Be Love

From the initial stabs of synth, we know this is going to be an Ibiza-type dance anthem. Has Christina called Calvin Harris and asked him to guest on her album? No, she's done it all herself! The drums are loud and in-your-face and the electronica's overwhelming. It's Christina-meets-trance as she roars over the unrelenting, constant sound of the synthesizer. Oh, and she's pretty saucy with her lyrics too. Let there be love indeed.

At last! A ballad! Christina slows the pace down for this and, boy, does she prove her worth as a singer. It's not all about the hot pants and skintight outfits, as this song proves. She belts this out as if her life depends on it. You know how some people are destined for certain things, well Christina admits here that she was born to sing. And sing she can. There's soft strings, a delicate piano melody and some hefty 80s power ballad-type drums kicking in before the end. Oh, and there's an epic key change. Amazing!

Favourite lyric: "When I open my mouth, my whole heart comes out"

Undeniably brilliant. Another ballad. But ten times better than the previous track. This is elegant and confessional, as Christina pleads for a second chance from her lover. It's clear she's done wrong, but she's asking for forgiveness and wants to give things another go. Her voice is raw, the backing track is minimal and the result is beautiful. It's just Christina and her piano, and we think we're in love with this. We'd definitely forgive someone straight away if they came round singing like this to us. If Blank Page gets released as a single, there's no denying it could be just as successful worldwide as her 2002 hit Beautiful.

Favourite lyric: "If I could undo that I hurt you, I would do anything for us to make it through"

Things get dark for track number nine, as Christina reflects the battlefield of love. Her vocals echo against a frantic marching-band drum-beat. This tune may only be mid-tempo but with the persistent drums and Christina's fast vocals, there's a certain urgency, energy and pace to the song. We do indeed feel like we're in the middle of a battlefield. Quick, dive for cover!

Favourite lyric: "Drop down your defenses, I'm raising the flag"

Another party-like song of lust and desire. She's got herself a bloke and wants to take him from "Hollywood to Japan". As the song title quite rightly says, she's going all around the world with him. There's crashing drums, a thumping bassline and an insanely catchy chorus. She even gets a bit of French in there, asking: "Voulez-vous coucher avec moi ce soir?"

Favourite lyric: "Imagine all the things we could do... Everything and more"

Oh dear, Christina isn't happy. She really isn't happy. This song may start off all plinky-plonky and soft, but beware, by the chorus she's throwing tonnes of attitude and sass our way! If you liked the boldness and brashness of Makeover from her Stripped album, you'll love this. Play this down the phone to your boyfriend if he's not doing good by you. Prepare yourself for the last two words of the song. Powerful. Strong. Expletive. Naughty, Christina.

Favourite lyric: "Spin around in circles on my middle, middle finger"

Ready for a tender, heartfelt track with fragile, almost nervous-sounding vocals? If you like Love The Way You Lie, then you'll love this. Raw, simple and full of emotion, as Christina proclaims she will rise from heartbreak and not let her ex pull her down. An empowering, delicate anthem.

Favourite lyric: "I will rise undefeated"

This is a pop-meets-rock-meets-country story of heartbreak. Christina says she's sitting alone in a bar late at night. She's feeling sorry for herself. We've all been there, right? Anyway, this is one impressive close to the album. There's a simple guitar riff and a toe-tapping mid-tempo drum beat as Christina takes the first verse, Blake sings the second in his raspy country tones and the two unite for the chorus. It's mature, sophisticated and unlike anything else we've heard on the album. If you want variety, you got it.

Favourite lyric: "Another shot of whisky please bartender, keep it coming till I don't remember"

Lotus is released on 12 November

Posted by AGUILERA ONLINE™ at 3:44 PM