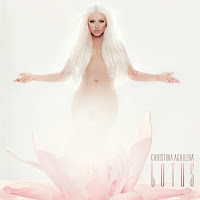 For Christina Aguilera nude is the new black, and the singer/mother/The Voice judge is determined to make this trend stick. After much backlash for gaining weight, the press has finally come to terms with the 31-year-old’s healthier and –let’s face it– much more relatable frame.

On the cover of her upcoming album, Lotus, Xtina gets rid of all clothes (goodbye, wardrobe department!) and shows off her curves. Among the ones congratulating Christina Aguilera on her bold move is celebrity blogger Perez Hilton.

And just in case you didn’t get the message, listen to Your Body , her new single – it’s self-explicatory. The fair-haired beauty has never been shy about her sexuality, and some things never change.

Congratulations are in order for the styling in the video: in an industry were most pop starlets are a size zero, the blonde bombshell looks amazing outfit after outfit. It’ll be interesting to see what her team has in store for the album tour. Lotus is scheduled to be released on November 13th, as the singer mentioned via Twitter.

Whatever size she is, hair colour she chooses or clothes she wears (or not), it can’t be denied: Christina Aguilera is a woman who is comfortable in her own skin. And there’s nothing more attractive than that.