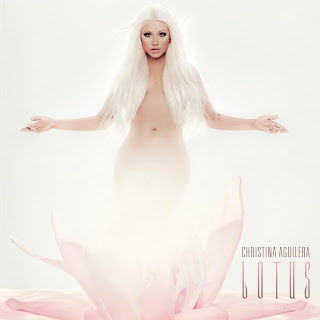 Listening to an album while the artist who recorded it is feet away can be an awkward experience. Do you clap after every song? How much is too much head-bobbing? Is it rude to get up for a bathroom break? What about the bar?

On the other hand, it’s the rare opportunity for said artist to truly present their vision -- to talk about each track, how they came together and what the album means as a cohesive collection of thoughts and emotions put to melody and lyrics. It takes a certain showmanship to pull it off -- not only to gather your supporters but to turn an intimate setting into a giant pep rally.

To that end, Christina Aguilera has no trouble saying, “Go, me!” It’s part of the reason she’s come to sell tens of millions of albums, win four Grammy Awards and land a well-paying gig as chief celebrity coach on NBC’s The Voice. And now, at 31, she readily confesses (even to a room full of journalists, TV bookers and label executives): “I'm proud to be the pop star that I am.”

The proof is in Aguilera’s fifth proper full-length Lotus (she’s released seven albums since her 1999 debut, including a Spanish record and a Christmas collection), which the singer explained at a listening party held at Santa Monica’s House of Rock is her “full circle” moment.

Teaming up for two songs with hitmaker Max Martin, and completing the collaboration cycle with fellow Voice stars Cee Lo Green and Blake Shelton (both of whom appear on Lotus tracks, though the latter has yet to record his part), she describes the finished product as a “labor of love” and the latest turn in “a long road.” Said Aguilera on Wednesday night: “I've had radio success, I’ve had non-radio successes -- it's all about creativity and expression. I’ve learned a lot.”

Indeed, you could look at Lotus as giving a nod to each of Aguilera’s previous albums. There’s the unbridled sexuality of “Genie in a Bottle” and “Dirrty” in tracks like “Your Body” (originally titled “F--- Your Body,” she revealed of the “Maxtina” composition); the vulnerability of “Beautiful” in “Sing For Me,” what Aguilera calls a “true vocalist song;” the moodiness of “You Lost Me” in another Sia composition “Blank Page;” and the balls-to-the-wall fist-pump of “Fighter” in the Alex Da Kid-produced big drums sound of “Cease Fire.”

“I’m a risk-taker,” said Aguilera, citing her 2002 album Stripped as, “The first time I was able to be myself [and] peel back all the layers.” Back then, she added, “I felt so lumped into a stereotype. I came out at a time when there was huge pop explosion -- you had your boy bands and Britney [Spears], supposedly my rival. There was huge media hype and controversy, which always seems to follow me. It’s just the way it is.” Lotus symbolizes a “rebirth” for Aguilera, now a mom to son Max, who explained that she chose the name because, “It means the unbreakable flower -- something that stands the test of time.”

It’s a lofty goal for an album, but looking around at a packed room of music business hitmakers, gatekeepers and influencers -- among them bookers for Chelsea Handler, American Idol and the American Music Awards, and many members of team Xtina, including manager Irving Azoff, RCA Records president Tom Corson, CAA music chief Rob Light, attorney Eric Greenspan, and producer-executive Ron Fair, who first signed Aguilera while she was still in her teens -- and one thing is clear: the enthusiastic applause was the real deal.

Source: THR
Posted by AGUILERA ONLINE™ at 10:10 AM