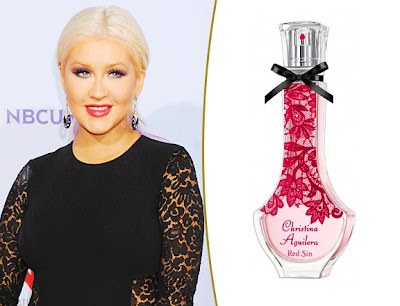 On top of a new album, single, and beauty-stacked music video, Christina Aguilera is ALSO launching a brand new perfume. The new scent, Red Sin, is the latest addition to Xtina's major fragrance arsenal, and probably the spiciest one yet with notes of ginger, cinnamon, sandalwood, cyclamen, musk and red apple. We took you through her sultry commercial for the fragrance earlier this month, but thanks to our friends at Fashion Indie who sat down to chat with THE Miss Aguilera, we now get a snapshot into the thought process behind developing the scent and the ad spot. Check out the 5 things we learned from their interview with Xtina after the jump!


1.) Much like Taylor Swift, Christina's favorite color is red: "It has always been my favorite — it is my go to lipstick color, and as you can see in my house there are accents everywhere."

2.) "Snow White and the Seven Dwarves" and the Bible may have influenced the fragrance itself: "The story with using red apple is that it ties in with temptation. Temptation has always been something in fairy tales and stories through history which can be seductive, alluring, and enticing."

3.) The word "sin" has a positive connotation in Xtina's world: "I want women to feel empowered when they wear it. The scent is boldly sexy. I want women to be unafraid to feel a little mysterious, with a little sin involved."

4.) The TV ad shoot happened in Christina's home: "The commercial was shot in my bedroom."

5.) Perfume plays a big part in Xtina's nighttime routine: "I put on fragrance before I go to bed and get under the covers. Scent is a really important thing to me; it sort of relaxes me and makes me feel sexy, feel seduced and hopefully have seductive dreams."

Source: MTV (Style)
Posted by AGUILERA ONLINE™ at 6:40 AM