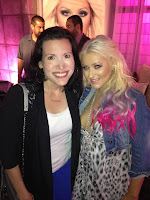 Well we’ve been watching Christina Aguilera on The Voice with our very own Carson Daly, and we’ve been patiently waiting for her new album, Lotus. The good news is, the wait is almost over! Lotus is due out November 13th, but you don’t have to wait that long for more details because I got an exclusive first listen!

The listening party was at an amazing estate in Santa Monica, called “House of Rock” – it even had a recording studio on the top floor. I mean, the place was insanely gorgeous! Christina arrived wearing a flowing leopard print maxi dress with a little jean jacket. She had on sky high hot pink and gold heels and sparkly long necklaces. Her signature blonde hair had purple and hot pink tips and looked super cool!

I got to say hello to her and told her I work with Carson – yes, of course I’m going to throw out there that we both work with him! Actually now that I think about it, how crazy is that? Anyways, she was sweet and you could tell she was very excited to play her new music.

We headed to a totally cozy room with fresh flowers and candles burning. There were long, flowing white draperies and faux fur pillows all over the comfy couches. Christina was at the front of the room in a big chair with her notes handy so she could talk about each track as she played them for us. She said she really wanted to sit down and walk us through the album rather than just have it playing in the background while everyone mingles. I was glad she did it this way because it meant much more to hear about her music and how she felt about each track.

Christina talked a lot about how she’s been through a lot since her last album. She mentioned The Voice and talked about how special it was to mentor aspiring singers on the show. She touched on how happy she was for such a full career, saying, “I’m proud to be the pop star that I am.”

Then she played the intro on the album, explaining that she chose the name Lotus because, “It means the unbreakable flower — something that stands the test of time.”

So let’s get to it, here’s a little preview of my favorite songs I heard from Lotus: 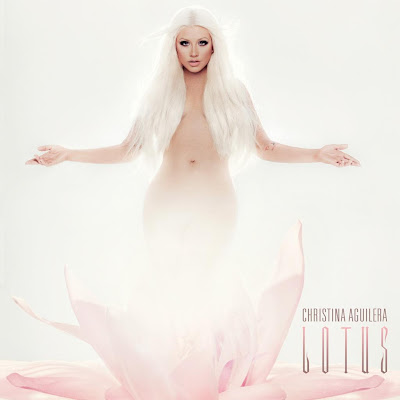 Make The World Move – this one features Cee-Lo Green, and she did say his part in the song was just kind of made for him. As you’d expect from Cee-Lo, this song is upbeat, soulful, all around fun.

Let There Be Love – One of my faves on the album, this is a dance track and another she did with Max Martin. In fact, she said he calls them “Team Martina.” (Or was it “Maxtina”? You get the idea.)

Sing For Me – Really pretty. Describing this song, she gave a shout out to her fans and said this is almost an anti-bullying anthem.

Blank Page – Slower song she worked on with Sia. She said how happy she was to see Sia getting more mainstream attention. The vocals on this one are amazing, classic Christina.

Cease Fire – this is a song she did with Alex Da Kid, and she talked about his work with Eminem. I could definitely hear the influences here, the song is edgy and full of fire. “I’m a risk-taker,” she said, adding that controversy “always seems to follow me. It’s just the way is.”

Circles – oh man, this is a fun song. It’s a big sounding song with sassy lyrics and those giant Christina vocals. She described it as a song for the haters. Like “Fighter” but “think more tongue-in-cheek.” She giggles at the end and it’s adorable.

Just A Fool – Another cool duet, this one is with Blake Shelton. She spoke very highly of Blake and said he has such a huge heart. She told us how emotional he gets over his team on The Voice, and how much he cares. This song is a little bit country and a little bit soul. It’s very pretty and emotional.

She decided to save a couple of surprises for when Lotus actually comes out, so we’ll get to hear them on November 13th. I can say this, if you’re a big XTina fan, I don’t think you’ll be disappointed with Lotus.