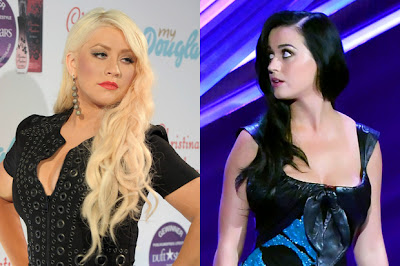 With Round 1 of voting coming to a close, it's looking like Christina Aguilera is going to slam Katy Perry in a tight race toward the Best Video of 2012. At least that's according to the fans, who are voting her glittertastic, man-murdering "Your Body" video ahead of Perry's Army Strong "Part of Me" clip.

If Aguilera wins, that means Katy is no longer a contender for the Best Video of 2012. California Girls: They're no match for former Mouseketeers. (Unless Katycats make "Part of Me" one of the four top-voted losing videos: Then Perry will return with vengeance as a Wild Card pick in Round 3.)

Xtina fans have gotta be happy about this. After a bit of a misstep with Bionic and Burlesque, it looks like "Your Body" and the upcoming Lotus album are poised to take The Voice coach back to a place in the pop culture pantheon just as high as her soaring pipes.

But does Aguilera's victory over Perry surprise you? After all, Katy Perry did score a whopping nine No. 1 singles in the last four years, compared to Christina's one No. 1 (the Maroon 5 collabo "Moves Like Jagger).

Do you think "Your Body" gets a boost because it's fresh, shiny and new, whereas "Wide Awake" is a more distant music video memory? Or "Your Body" just a much cooler video? Tell us what you think in the comments below, and be sure to give your vote for the Top 40 of 2012 before we move along to Round 2 on Monday afternoon!