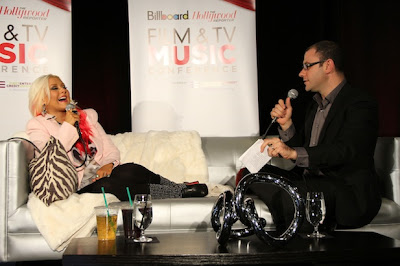 Christina Aguilera's Keynote Q&A today (Oct. 25) at the Billboard/Hollywood Reporter Film & TV Conference was as colorful as her two-toned blonde/bright red hair: She dropped some f-bombs, spoke plainly about her career, and even belted out a bit of a classic tune.

"Now everyone is a critic," she said with a smile, on the subject of the tabloid press and online bloggers. "I don't read blogs. It's just God-knows-who in Buttf--- wherever writing hate sh--. You can't take it seriously. I'm sure you've all been hated on at some point by buttf--- people."

"It's real talk today," she said at one point to applause.

Bill Werde, Billboard's Editorial Director, joined the singer on a couch in front of a meeting room full of conference attendees at The W Hotel in Hollywood. "Ooh, cozy with Christina!" the singer joked as Werde moved closer to her on the couch, setting the lively and fun tone.

The five-time Grammy winner, whose Max Martin-produced "Your Body" is currently on Billboard's Hot 100, was reflective when answering questions about her nearly lifelong career in music, film and television.

"Sometimes you just know what you're placed on this earth to do," she said of her early days. "Through my childhood I had sort of a chaotic past and upbringing. Music came as a sort of release and escape. Inevitably, you're going to stray toward that path. I started out as a wedding singer singing at block parties at 6, 7 years old. Then came 'Star Search.' That was my first big break at 7 years old. Ed McMahon couldn't say my name right."

She lost "Star Search" but ended up on "The Mickey Mouse Club" by age 12, the same program that of course helped launch Justin Timberlake, Britney Spears and Ryan Gosling. "Great casting agent," Aguilera said by way of understatement. "I think his name was Mike Casella." (She's correct).

She talked about auditioning for then-A&R man Ron Fair (now a special consultant at Front Line Management) in his office. The pair are still friends. "Our kids go to the same pre-school," she noted. "I walked into his office and he was like, 'Sing for me.' I whipped out Whitney Houston's "Preacher's Wife" gospel songs. That stayed in his mind."

Later, she said she taped herself in her bathroom singing Houston's "I Want to Run With You." She landed her first record deal and the "Moulin" soundtrack the same week.

She's still got the acting bug. She credited Cher with helping her hone her chops on 2010's "Burlesque," though she admitted the film wasn't without its cliches. "Cher taught me about how, for your off-camera scenes, [you should] be just as good if not more of an actor [for] the person you're in the scene with. It's going to make the whole thing better -- to really be a giving actor. It makes for an amazing scene. You start to understand and appreciate the beauty of film and the passion, the love and the craft that goes into the whole process. It was a wonderful learning experience."

She and Cher had plenty to bond over, from the highs to the lows of careers in music and film.

"It's hard being such a powerful woman in the business. I'm known for not always being warm and fuzzy, because you'll just get bulldozed over. You learn to put up this little protective shield, but it's because of something. In my music, I come off as being very open about being insecure, vulnerable and sensitive sometimes. Then I'll go onstage and be this powerhouse force to be reckoned with." It's all about that balance, she added.

Part of the way she maintains that balance, she said, is by avoiding the tabloids. "I'm a mother. I'm a businesswoman. I have a zillion and one things going on in my head, on my plate, creatively. I put my son to bed then I go right into my backyard, which is my studio house. It's a lot. I really truly don't have time for the static noise. It's just not real. They're not real magazines. It's trash. It's rumors."

"If my son has a cute picture of him playing soccer one day, I'll be like, 'Oh, forward me that,' but my publicist will tell you, I don't want to hear the good or the bad," she added. "I don't want to believe my own hype. I want to stay hungry and stay eager and be the best that I can be."

Working on "The Voice" renewed her own hunger as a singer, she said. She credited the experience with her desire to get back out there with her new album, Lotus.

"These 6-year-olds weren't around when I had 'Genie in a Bottle' and 'Fighter,' " she said. "They are watching me in this big red chair giving advice. There's a lot of auto tune going on now and that's all great, it's an art form. But what's great about 'The Voice' [is that] it's just raw, real talent."

Aguilera confessed she hasn't seen much of any of the singing competition shows -- including her own. "I've not actually seen a full episode of any of the other music shows. I saw the commercials early on of 'American Idol' of Simon being a dick. I was like, 'Man, that's not what it's about!' I didn't want to treat people like that. I wanted to do 'The Voice' to show that we can be positive. We don't have to knock people down." Which isn't to say she was knocking "American Idol" altogether.

"Jennifer Hudson came from 'American Idol' and went on to do 'Dreamgirls' and won an Oscar," she pointed out. "I know we all have different formats. I don't even watch my own show: I tape it, I'm out. Time to be mommy and time to work on my record and of course invest time in my team, picking songs. I juggle a lot."

Christina said she's formed a great friendship with all of her fellow judges. "We've got a chemistry like a family. Everyone knows me and Adam [Levine] can bicker and get on each other's case. Cee-Lo is just cool, he comes from a real artistic value place. Blake [Shelton] is just a good old time. He's become my big bro." Aguilera and Shelton duet on "Just a Fool," one of the new tracks from Lotus.

The album is full of songs with meaning, something she's consciously steered toward for some time now. "I'm a message girl at the end of the day. Songs like 'Beautiful,' songs like 'Fighter.' They're very introverted and can be very vulnerable but empowering. I was tired of singing about fluff and candy and Genie in a Bottle." She noted that she went to people like DJ Premier, Ladytron, Le Tigre and a pre-fame Nicki Minaj at different points in her career. She was also quick to "thank God" for "Genie in a Bottle" and similar songs, because "they gave me the creative freedom that I have now."

"Beautiful" of course remains a staple Aguilera track and she treated the audience to the song's first few lines while telling the story of its creation. "Linda Perry is raw, she's real and she intimidates a lot of grown men. She's amazing. I was having a really bad day. I came into her studio. It was at her house at the time. I was working with her on a bunch of stuff. She just kind of sat down at her piano in her dining room and started singing."

The audience applauded, then Christina went on to explain that Perry discouraged her from doing all of the showy vocal stuff." 'Don't do all that Mariah sh-' -- that was her, not me, I love that sh--!" Aguilera clarified. "But she was like 'don't be doing all that acrobatic sh--, just sing!'"

Perry is a colorful personality on Twitter -- Werde suggested Aguilera start following her. "I was really late to [Twitter]," she admitted. "To me it was presented as like, 'this is what I'm having for breakfast this morning.' I was like, 'Really? Who cares.'" But now she's gotten the hang of what it can be. "I said something the other day on Twitter and I was like, 'Oh, this is what you can use Twitter for!' I might have opened up a whole new can of worms and a new appreciation for it. I just didn't want to be generic. Some people use it in a frivolous way."

There's nothing frivolous about her approach to her new record, which she summarized thusly:

"It's embracing the woman that I've grown to be and embracing myself, full circle, as a pop star. Being on 'The Voice' has made me realize it. And being face to face with my superstar little popstar team on 'The Voice' has been inspiring and inspires me. It's made me come full circle and appreciate the journey of the last decade-plus. I chose Lotus because it represents the unbreakable flower that stands the test of time."

And even more to the point: "Sh-- happens, man. This is the business. It's not going to be all cute and pretty and tied up in a little bow."