[NEWS] CHRISTINA AGUILERA EMBRACES HER BODY THROUGH AGING AND MOTHERHOOD 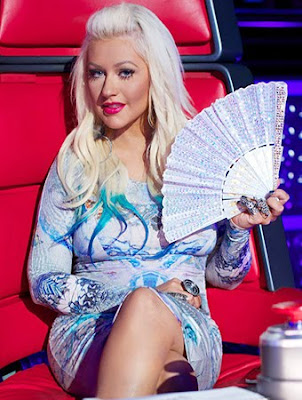 She's taken her knocks, but Christina Aguilera remains defiant on the subject of her body – saying she loves everything about herself as a mother in her 30s.

"Some people are afraid of change and [feel] that getting older is a bad thing, but I really love maturing and gaining wisdom," the 31-year-old pop star, Voice coach and mother of son Max, 4, tells PEOPLE. "And the experience of being pregnant and having a child and seeing what a woman's body can do is amazing."

"I've always been one to make it very clear, love me or hate me, take it or leave it, this is who I am," she says. "I embrace my body, and I embrace everything about myself. Coming full circle is a celebration of freedom and happiness because that's what [my new album] Lotus is representing. I'm embracing everything that I've grown to be and learned to be."

About that new album, which comes out Nov. 13 – did Aguilera have any qualms about appearing nude on the cover?

"It's very interesting, because I don't see that album cover as being nude at all," she says. "I actually feel very covered and it's all about embracing white light and freedom, and I didn't want it to be about too much fashion. I wanted it to be raw, real and free and a celebration of life and the woman I've become."

On the subject of The Voice, Aguilera says Usher and Shakira will be great replacements when she and Cee Lo Green take a break next season. And Shakira needn't worry – it's not too taxing for an expectant mom.

"Well, you just have to sit there, so that's an easy gig pregnant. But I have all of the confidence in the world," Aguilera says. "They are true pros. Shakira and Usher have been doing it for a very long time and have their own fan bases. They can keep my seat warm."