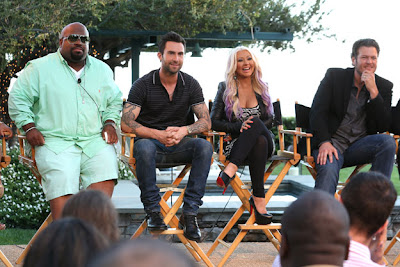 With the premiere of 'The Voice' Season 3 right around the corner — the first episode airs tonight, Sept. 10 — people are getting more and more excited to see what is in store for us, especially following Season 2's huge talent. Third time's a charm after all, right? [More...]

Even though we're stoked to see some fresh-faced talent take the stage, we're equally excited for the little things that take place in any given episode of the hit NBC show. So we've taken it upon ourselves to make a list of the top five things we're looking forward to on Season 3 of 'The Voice.'


5. 'The Voice' is supposed to be a show that showcases the talents of undiscovered people, but (hello!) the performances by the coaches are a welcomed and much appreciated change. We enjoy the fact that four different artists with four very different vocal styles manage to find a way to harmonize, perform together, and show the world how it's really done. And any excuse to watch Adam Levine shake his derriere for three minutes is good enough for us!

4. Animals have somehow found their home on 'The Voice.' First it was Cee Lo's cat Purrfect (who seemed to be plotting someone's demise), and now there's word that his parrot, Lady, will make her debut on Cee Lo's shoulder. Perhaps she will be taking flight during one of the contestants performances, or offering her own critiques? Parrots can talk, ya know — it will be interesting to hear what she has to say!

3. The show has continuously shattered ratings, thanks to the format of coaches fighting for talent based on the voice alone. This has allowed viewers, who have latched on to the successful reality show, to meticulously and religiously vote for their favorite contestants. With Season 2 showcasing extraordinary raw talent (Juliet Simms, Chris Mann, and winner Jermaine Paul to name a few), we expect Season 3 to up the ante a bit, and we seriously cannot wait to hear all of the new talent 'The Voice' has in store for us.

2. These two deserve their own spinoff show for their relationship alone. Adam and Blake are clearly very sweet on each other in the most bro of ways, and even manage to exchange an “I love you” from their coaches chair from time to time, and that oddly excites us. But this picture sums the duo's relationship up perfectly: “Whew!!! So exhausted from our latest @NBCTheVoice photo shoot…,” wrote Shelton in the tweet. Oh. My. Lawd…

1. Now this is some exciting stuff! In season three of 'The Voice,' a new rule has been implemented, aptly titled the “Steal” rule. What this means is that a coach is allowed to steal a contestant from another team after that coach has eliminated his/her contestant. This all leads up to the 'Knockout Rounds,' where teams will be chopped down to five contestants before the live episodes begin. How ruthless, how cruel… we love it!