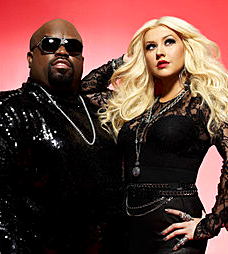 The Voice is shaking up its judges panel.

The NBC reality hit has hired R&B singer Usher and Latin singer Shakira as “coaches” for the upcoming spring edition of the series. They’ll replace Cee Lo Green and Christina Aguilera, who are expected to return to the show next fall. The new additions are part of a plan by NBC and producers to develop an ongoing tent of talent for The Voice that can be mixed and matched as needed. Given the judges’ level of success and tour schedules, it’s difficult to have any of them appear on the show all season now that NBC has decided to run the series in the fall and spring.

“Having award-winning artists as coaches means they need to be able to tour,” said executive producer Mark Burnett. “Whether in the red chair or on tour, our coaches have their chairs for life. This is exactly why, after three seasons, we needed to allow them to rotate out so they can get on the road amongst their fans. Meanwhile, we’re incredibly excited to have singular artists like Usher and Shakira joining the fold.”

Aguilera is releasing a new album and going on tour. CeeLo is developing new music plus working on a scripted comedy series for NBC based on his life. Blake Shelton and Adam Levine will continue on The Voice this spring (and you make your own snarky assumptions about that). The Voice recently returned for its third season and though its ratings were down from previous seasons, it still managed to outshine the Britney-fueled second season premiere of Fox’s The X Factor.


“Being a coach on The Voice is a wonderful experience and the relationship amongst us all is like an extended family,” Aguilera said. “I am so proud of being part of the show from the beginning, all the work we’ve done, and proud of what the show stands for as a whole. As I have expressed since day one of the show, that I am a singer and performer first and I am so excited to get back to that love. Since this year NBC and The Voice have decided to tape back-to-back seasons, requiring a full-year commitment, it is important for me to take season four off, allowing me to support my music that my fans have been waiting for — with the release of my new album Lotus on November 13. By pursuing my first passion of music during the break, I am also able to come back and offer even more to my team on The Voice in the future.”

“First, thank you NBC for supporting my decision to take this season four hiatus!” Green said. “It says that I’m seen and respected as a complete artist and not just a cast member. I’m highly enthusiastic about focusing my undivided attention on my additional endeavors and interests like my upcoming solo album, new Goodie Mob album, Las Vegas residency Loberace, new memoir, and new NBC comedy. It’s great to also give a host of other talent the chance to experience what a joy it is to be part of what is truly the best show of them all, The Voice! I will return for season five and will be watching season four. NBC is home and as far as Usher and Shakira are concerned – ‘mi casa su casa’.”