[NEWS] SIMON COWELL IS SCARED BY 'THE VOICE', REVAMPS 'X FACTOR' INTO 'THE XTINA FACTOR' 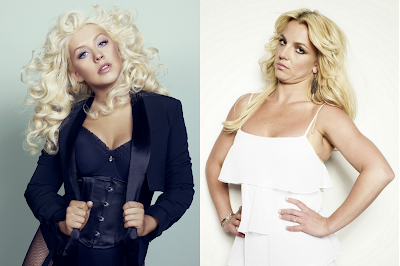 NBC has added a third time slot for 'The Voice' during it's premiere week going head to head with FOX's 'The X Factor' 'The Xtina Factor' on Wednesday, September 12th. The third time slot addition was announced earlier today and will run from 8pm-9pm.

The last-minute addition has no doubt sparked a lot of controversy and Simon Cowell released an official retaliation to TMZ confirming he's cowering over the covert move against 'The X Factor' 'The Xtina Factor'.

Simon Cowell is furious at NBC for trying to sandbag next week's premiere of "X Factor" by adding a Wednesday installment of "The Voice" ... declaring, "This is a cynical, cold-hearted, unprofessional way of doing business."

Well isn't that the pot calling the kettle black? If anyone in the entertainment industry is known for being cynical, cold-hearted, and unprofessional, it's Simon Cowell. The only thing he should be furious about is hiring Britney Spears to judge a singing competition.

Simon tells TMZ, he thought he had a "gentleman's agreement" with NBC ... that "The Voice" would run Mondays and Tuesdays, and "X Factor" would run Wednesdays and Thursdays on FOX ... so fans could watch both.

Simon, you have to be a gentleman before you can even begin to utter that very word let alone understand it. Trash-talking 'The Voice', it's format, and the coaching panel is far from appropriate, gentlemen-like behavior.

Simon says NBC is turning on its own audience, forcing them to choose between Christina Aguilera's show and Britney Spears' new show. And speaking of them, Simon says, "Britney's not going to appreciate the fact that Christina -- who has been a bit of a rival -- isn't allowing Britney to have a night of her own."

Is that right, Simon? Poor Britney! I'm glad it's coming out that he is only using Britney as a prop to play the victim and make Christina into the enemy per usual. Pressed?

Simon tells TMZ, he believes the move is as personal as it gets, because "The Voice" came to England and went head-to-head with Simon's show, "Britain's Got Talent" and got its ass kicked.

Simon, now you sound like you're just grasping at straws.

Simon says, "These guys have really got it in for us. It's nothing short of dirty tricks."

Now Simon is basically confirming that he is insecure about the format for his show and once the American audience realizes first-hand that true talent prevails over 'dirty tricks' such as hiring Britney Spears to go up against Christina Aguilera and her involvement with a game-changing singing competition that has become immensely successful, it's quite clear that Simon is putting all his eggs into one basket while Christina remains the trendsetter.

Simon says he doesn't think Britney knows yet, but when she finds out "She's going to be devastated because she's put her heart and soul into this."

Once again, Simon is playing the 'Poor Britney' sympathy card and at this point he sounds completely pathetic. Is he implying this sudden move will put Britney on the verge of another mental meltdown? If his 'good' show is so 'good' then why not take this opportunity to shamelessly plug whatever it is about said show that makes it worth watching? The fact that season one of 'X Factor' TANKED in the ratings and led to a complete overhaul of the judging panel is an obvious indication that maybe the 'X Factor' isn't as good as it's crocked out to be..

As for Cowell, he says he's not scared, adding, "I can't bear it that the network is playing political games and playing with the audience."

I don't know about you guys, but Simon Cowell couldn't sound anymore scared. If only Christina Aguilera didn't turn him down, refusing 'X Factor' before signing up to be a part of 'The Voice', maybe he wouldn't be so bruised and bemused. Instead of playing the blame game and pitting past female rivals against each other, maybe he could do something useful and shut up for once? That would be a real testament to his character but it's probably not going to happen anyway.

If anyone in this scenario is playing political games and playing with the audience, it's Mr. Cowell. People in glass houses, should not throw stones.