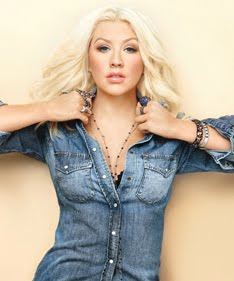 Christina Aguilera is insanely talented, mind-bogglingly famous and totally not freaking out about it.

In the four minutes I spend waiting on the sidewalk outside Christina Aguilera’s Beverly Hills mansion, I get a sense of why being an international superstar might suck. No fewer than seven celebrity star tour vehicles pass by the well-polished gates. “Is this Christina Aguilera’s house?” someone shouts. Two parties on foot want to know the same thing. “I don’t know,” I say.

Eventually, a young man in cargo shorts ushers me into the cool, high-ceilinged foyer. An enormous red crystal chandelier hovers, oddly reminiscent of the spaceship in Independence Day. Underfoot, a lush patterned rug proclaims “CA & JB.” Since Aguilera and music executive Jordan Bratman split in 2011, it is the decor equivalent of a tattoo, and I wonder if it could somehow be rewoven to read, I don’t know, “Cats Get the Job Done!” à la Johnny Depp’s “Wino Forever.”

I’m examining a framed photo of her four-year-old son, Max, atop a black lacquer table—one where his dimpled smile is particularly adorable—when Aguilera appears. As a judge/coach on The Voice she’s routinely red-lipped, coiffed and either very fashionable (peplum jacket, fishnets) or mega-fashionable (studded hot pants). Here, she’s barefaced, in black leggings and a red sweatshirt, her platinum hair apparently towel-dried. She looks cute, like a college junior about to curl up with her statistics book. “Hi, I’m Christina,” she says. The “Hi, I’m … ” part of the greeting, like her handshake, is light and sweet, very ex-Mouseketeer. But the “Christina” part has a sultriness to it that seems less an overt attempt to be sexy than it is just the natural grain of her voice. I abandon the intelligent professional thing I was going to say in favor of crying out: “Me and a bunch of friends dressed up and went to see you and Cher in Burlesque on opening night at a mall in rural Pennsylvania.”

“That’s cute,” she says. “Awww.” She will issue this response every time I compliment her. We move into another emphatically red room—red rug, red patterned wallpaper, tan velvet couch with red tassels—with a movie screen at one end and a grand piano and bar at the other. I’m directed to a silk brocade chair in easy reach of a glass jar of lollipops. “And the song "Fighter" is incredibly important to me,” I say. “I listen to it when—well … I feel bad about myself and I want to persevere instead of just, uh, die.”

“Awww. That’s why I wrote ‘Fighter,’ ” she says. “I have that need in me to help people. I am all about the underdog.” And then Aguilera sits in the corner of the velvet couch farthest from me, and I’m tempted to say, “Hey, I’m an underdog! Why don’t you want to sit near the underdog?” Then I remember the hordes of people outside, all wanting a piece of her, and resolve not to take it personally.

As we talk, her actual dogs—the papillons Chewy and Stinky and the pint-size mutt Nugget—scramble over the couch, alighting on Aguilera as if she were a station on their doggy interval-training course. Nugget slaloms around the enormous mug of coffee Aguilera has left on the table and vaults off her lap. “Nugget!” she shouts. “Stop.”

Nugget’s behavior only devolves, but Aguilera seems okay with that. She exudes a calm, almost imperturbable presence and intense star power. She does giggle a fair amount, but once she stops, she looks expectant, almost arch. Should I ask about her upcoming fragrance, Red Sin; her charity work with World Hunger Relief; or the Alexander Wang tracksuit dress she wore to a recent dinner with her boyfriend, Matt Rutler? I cut to the chase: “Was there a day when you realized: ‘Oh my God, this is it. I am going to be huge’?”

Now Aguilera full-on laughs—like it’s either funny that people think of her as that famous or funny that I would ask her about it—and tells me a story about one pivotal day in 1997 when she got two phone calls, one offering her a record contract and one offering her a song in the movie Mulan. Within two years (is there anyone left in the world who hasn’t heard "Genie in a Bottle"?), Aguilera was a big star, but her rise was far from idyllic.

“When you’re young, it’s so easy to get bull­dozed,” she says. She was surrounded by people trying to control what she said, what she sang and what she wore. “There were these two ladies who worked at the record label who always wanted to come to fittings and dress me up like a Barbie doll. It was disgusting.”

But two years later, she’d freed herself of every stifling influence and in Stripped offered songs truly worthy of her talent. “I am beautiful, you are beautiful, we are beautiful,” she sang, and we believed her. In the video for “Fighter,” she burst out of a glass cage singing, “Thanks for making me a fighter,” and we all decided, about those ex-boyfriends, -bosses and -BFFs, “Hey, it’s actually good you were a jerk, because that motivated me to walk away from your sorry ass.” Madonna might have given us girl power, but Aguilera let us cry, get angry and have empowerment for dessert, all with a voice that made her contemporaries sound like they were practicing scales. Recalling the staggering success of Stripped, Aguilera doesn’t even shift on her velvet perch, only runs a hand down Nugget’s spine and says, “I was 21 and fearless. It was a really great turning point for me to be the artist I’d always wanted to be.”

That same steadiness allows her to stay grounded during setbacks. Her 2010 album, Bionic, underperformed, Burlesque was savaged by critics, she flubbed the national anthem at some Supposedly Important Football Game. Aguilera remains philosophical. “Difficult moments in life can either get you down or they can inspire you.” In the next few months, she'll drop a new album. “If you love ‘Fighter,’ ” she says, “you’re going to love my new album. As a 30-year-old woman, I’ve been uncovering my independence, and it’s been really fun to explore in the new songs.”

The Voice is just about the most perfect place Aguilera could find inspiration at this time in her life. (Cliffs Notes to the show’s format: Singers audition, judges listen with their backs turned. If they like the singer, they swing the chair around. Crying and competition ensue.) The only woman alongside CeeLo Green, Adam Levine of Maroon 5 and country singer Blake Shelton, Aguilera is sassy and not to be messed with. “You’re one-dimensional,” she informed one contestant, and another time, when Levine gave her some of his trademark pushback, she cut him off midsentence and just laughed. But she also dispenses lots of snuggly hugs and gushing tearful words of praise. As she talks about the show, a glow comes into her delicate, pale face. “It’s a big responsibility to help someone express themselves as an artist. I take it seriously,” she says.

An added bonus of The Voice is how its signature swivel chair—voilà!—allows for high-impact Aguilera fashion moments. Highlights have included a L’Agence silk maxi dress, a yellow Roland Mouret cocktail dress with sly bustline cutouts and an Alexander McQueen skull T-shirt. “I have always loved dressing up, being theatrical.”

She says she’s totally unrepentant about the way her clothes advertise her assets. “Actually, the challenge I’ve always had is being too thin, so I love that now I have a booty, and obviously I love showing my cleavage.” Her advice for her curvy sisters? “Hey, if you can work it and you can own it, that confidence is going to shine through.”

When she hugs me goodbye, I feel the melancholy of missed opportunity. I so wanted to come face to face with the Aguilera who unleashes such explosive and unguarded feeling in her music—in a way few musicians do. And as I exit, it occurs to me that all these people dying to get into this inner sanctum should know that as red as it is, it’s not the place to find the secret to her heart, which is, however, available on iTunes for $1.29.

Outside, the tour buses are still coming and going. “Hey,” someone asks. “Is that where Christina Aguilera lives?”

“No.” Then I get in my car and drive home, “Bound to You” playing loud, on repeat.

Posted by AGUILERA ONLINE™ at 9:49 PM