[NEWS] CHRISTINA AGUILERA WILL ALWAYS STAY TRUE TO HER VOICE The “Genie in a Bottle” singer still has it. Even after a music career that spans for more than a decade, she shows no sign of slowing down — turning her every wish into reality.

Even news of the upcoming release of her yet untitled album, her latest offering after 2010’s Bionic, is enough to send her faithful fans into frenzy. And no release date has been announced.

“The new album is almost done and I am so excited to share it with fans. My new single, ‘Your Body’ will premiere on The Voice this season,” she told The Jakarta Post in an email interview, referring to the popular reality TV show where she sits as one of the four celebrity musician coaches.

“A lot of the album is light and fun. Great dance and pop tracks. Others are really raw and intimate. I am so excited for the album.”

Just recently, the platinum blonde hair songstress — named as one of the world’s most successful performers of the last decade — has lent her trademark voice, teaming up with fellow Voice coach Adam Levine of the Maroon 5 to record the catchy dance tune “Moves Like Jagger”, which went straight to No. 1 on the Hot 100 charts.

The 31-year-old hinted that her new album would be something which marks her “rebirth”.

Since the last album, many things had crossed her path, from joining the successful singing show, her divorce from music executive husband Jordan Bratman two years ago and playing her role as a single mom for their four-year-old son, Max Liron Bratman.


But she has no plans to change a thing about her, or her career.

“I would never change a thing. The good and the bad all make us who we are as people and artists,” said Aguilera, whose parents were also divorced. “I am happy, the more I grow and explore and evolve.”

Enthusiastically, she shared her happiness of being in The Voice, which its third season will premiere here on AXN channel on Sept. 16.

The show has taken singing competition into a new height with its innovative format – judging contestants solely on their vocal talent and not their looks.

Aguilera promised the new season will not disappoint as it comes new twists.

“First, the blind auditions will be longer, teams will be bigger and we have added the surprise of a steal so coaches can take a member of another team if they get kicked off in battle,” she says.

“And the performances are going to be amazing.”

Being the only female coach on the show — alongside Levine, five-time Grammy award winning singer-songwriter-producer Cee Lo Green and country music’s star Blake Shelton — excites her, making her feeling like having three
protective brothers. 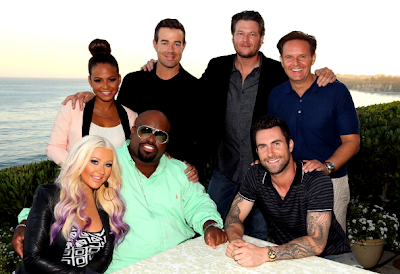 “I really love them all in different ways. Blake is very protective of me and I feel so safe knowing he has my back. Cee Lo is just so much fun to be around; and Adam and I are the most similar. I think that is why we argue a bit more, but it is all from love and really we always get along,” she says.

“The show has created a bond between us that we will always have. It is like an extended family. Outside the show, we are all so busy with music but we keep in touch from where ever we are. We care deeply about each other.”

Despite her popularity, she believed each coach has something to bring for the contestants to help pushing them and helping them to grow. “I feel we all are equally desirable,” she says.

For “Team Christina”, she said she would stay true to her heart and being as honest as she could.

“But I have a great mentor this season and I feel Billy Joe can really add an element that sets my team apart,” she said, referring to her team’s advisor, the lead singer and guitarist for Green Day.

Being on the show for the past two seasons, there’s best and worst moments for her.

“The best is seeing your team grow and seeing someone like Chris [Mann], who many didn’t expect to go far because of his [classical] genre goes almost all the way and the worst is always seeing people go. They are all so talented,” she says.

But she has no regrets.

A vocal force since the age of nine — performing in local talent shows in Pennsylvania where she grew up, she got her break on Star Search in 1992 before getting a part on the Disney Channel’s The Mickey Mouse Club, joining a cast that also featured present day stars like Britney Spears, Ryan Gosling and Justin Timberlake.

But it was “Reflection”, her song for Disney’s Mulan that led to her big break with the successful release of her self-titled debut album in 1999.

Since then, there has been no stopping her. The Spanish version of her debut, Mi Reflejo, released a year later, won the World Music Award and Billboard Award as the best selling Latin artist of the year.

Her follow-up album, My Kind of Christmas, and several collaborations further established her success.

In her next project, a heavy R&B album Stripped in 2002, she transformed her teen pop princess image into a sexy goddess through the provocative single “Dirty” and won people’s hearts with the ballad “Beautiful”.

She followed the album with Back to Basics, which was another commercial success, and then came Bionic, where she explored a unique mix of many genres and styles of music.

And now, the singer is living her dream — selling more than 30 million records worldwide, winning five Grammy awards and receiving a star at the Hollywood Walk of Fame.

While music is her thing, she also has perfumes named after her and served as the muse for London jeweler Stephen Webster’s sterling silver collection.

Her fans around the world — she has close to two million followers on her Twitter account @therealxtina — are showering her with love and affection.

“Fame is what comes with what I love, which is being an artist and performing. So to me that is always the main goal,” she says.

While devoting her time to her music, she added a new role — as an actress — through her feature film debut in the 2010 musical Burlesque, opposite Cher. The role earned her a Golden Globe nomination for Best Original Song for “Bound to You”, which she co-wrote and performed.

She also lends her voice for good causes, dedicating her time as a philanthropist for charities, human rights and world issues, including her work as a UN ambassador for the World Food Program.

“I loved working on the film and if another role came my way that I felt close to then yes I would — but music always comes first,” Aguilera says.

Juggling her many roles, she says, is all about setting the right priorities.

“To me it is about priorities. First and foremost, being a great mom to my son and being there for him. Then creating music — writing, singing and performing,” she says.

“I also love being able to give back. I work with the United Nations World Food Program and I am so proud of the work I have done with them raising money for people who are hungry.”

The singer, who also ranked 58 on Rolling Stone’s list of the 100 Greatest Singers of All Time, is generous in sharing her keys to success for wannabe singers.

“Know your range, study your idols and always do what you can to grow and learn,” said Aguilera. “I have so much respect for my fellow artists. I love Sia, Adele and Nikki Minaj.”

Despite her success, she still has many things in store for the genie in a bottle.

“The more you want to achieve, the more you are able to push yourself,” says the singer, whose biggest fear is of not taking chances.

And whether the chance includes a concert plan in Indonesia, she brings hope and expectation to her fans, saying that she may someday — once she’s done with the show. Then, it’s time to make a wish.

Email ThisBlogThis!Share to TwitterShare to FacebookShare to Pinterest
Tags: CHRISTINA AGUILERA, THE VOICE