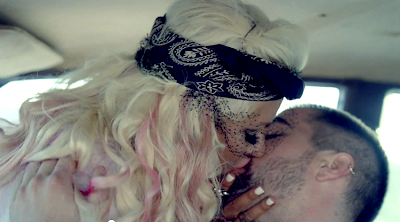 Christina Aguilera has become a tyrant of tease when it comes to her "Your Body" music video, and we ain't mad about it. We've already been flipping out over the variety of bad-girl scenarios caught in photos and in a previous behind-the-scenes clip (um, where she blows up a car in heels), but now we are pretty much losing it over the latest teaser where she's looking GORG and sensuously canoodling with a hot dude in a car. OBVS ALERT: This video is gonna be effing epic.

In the new short teaser from the music video (directed by Melina Matsoukas), "The Voice" judge is captured getting cozy with some Grade-A hunk in a car parked in a desert. Quick instances catch the pair kissing, then falling asleep -- but don't be fooled by Christina's softer side, 'cause once girl wakes up, she flashes a "my job is done here" look and ditches the bro! While the rest of us would have had a hard time leaving a dude that rocks aviators that well, clearly Christina has waaay more important things to accomplish... like remind us that she owns the world, and we're all here for the ride.