[NEWS] CARSON DALY SPEAKS OUT ABOUT 'THE VOICE' VS. 'X FACTOR' & SHUTS DOWN SIMON 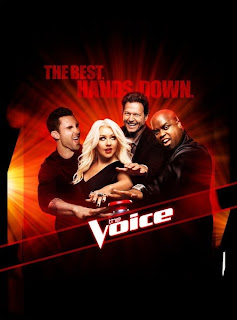 If you’ve been keeping tabs on Simon Cowell lately, then you’re aware he’s none too pleased with The Voice.

The singing competition, hosted by 97.1 AMP/Los Angeles’ very own Carson Daly, decided to extend its premiere week to 3 days, which means it overlapped with last night’s premiere of the revamped X Factor.

Cowell has gone on an all-out media blitz to voice his frustration, telling TMZ, “This is a cynical, cold-hearted, unprofessional way of doing business…Britney’s not going to appreciate the fact that Christina, who has been a bit of a rival, isn’t allowing Britney to have a night of her own.”

For the most part, The Voice has chosen to stay out of the fray, but Carson felt the need to address the elephant in the room on his radio show Thursday morning.

“I wanted to watch X Factor last night. I think you can’t deny that there was some buzz on this show…I was very curious to see how my old friend Britney Spears was….what she was going to be like and when she speaks in full sentences, was it going to seem sort of medicated or was she going to spring a new personality that I haven’t seen?”


“I like the format better of The Voice. I think the singing competition is better. I think they get to it quicker…When I flipped over, the first thing I saw, because I had no idea how they treat their artists or what are they trying to accomplish, and I saw this.” “I felt like I had seen that before. It reminded me of the first incarnation of American Idol. Oh, Simon kind of doing his thing and they are making fun of people singing and you know, the comedy comes from these people up on stage. We at The Voice…we just start from a completely different place. We’re not even trying to find comedy in people’s attempt to make it in music.”

The tension between Christina Aguilera and Adam Levine was palpable last season, but it seems almost non-existent this time around. Carson believes it’s because the coaching panel is finally settling into a groove.

“Everybody on The Voice season 3 now has just hit a stride. We know what we’re about now and we just like what we do. You can watch the other show. Watch X Factor if you want.”

Carson, however, feels there’s one major flaw that keeps him from truly enjoying a show like X Factor.

“The problem for me for the X Factor is that I have to sit through so much television just to get to something good, where we have so much good, we can’t even keep it in one show. Like we have to do montages of people that are good.”

For now, it appears as though The Voice has the upper hand. The NBC show bested X Factor in the ratings when they went head to head last night with 10.7 million viewers as opposed to 7.5 million for Simon Cowell’s crew.

“I never saw a lick of X Factor last year. I like The Voice better…I’m honest. I would tell you! By the way, there were some acts on X Factor last night that I thought were awesome and I think Demi Lovato is great. I think she’s an awesome addition for that show.”

At the end of the day, Carson says it all comes down to whatever format America prefers. “You know what? I think there’s two types of people. I think you either like the X Factor or you like The Voice. I mean, the good thing is that they’re crazily different shows. It’s like you either like football or you like basketball.”