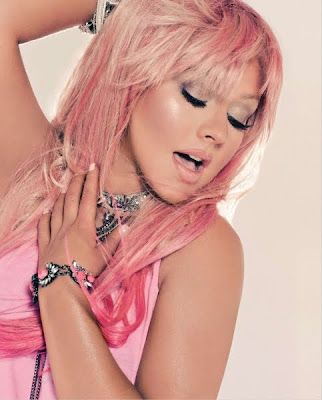 Christina Aguilera hasn't felt this way in a decade. The singer is reflecting on the eventful two years leading up to the release of her fifth studio album, "Lotus," from her home in Los Angeles -- a period that heralded the commercial disappointment of her album "Bionic"; a divorce from husband Jordan Bratman; the release of her first movie, "Burlesque," and its accompanying soundtrack; her highly successful stint as a coach on NBC's "The Voice" and accompanying appearance on Maroon 5's mega-hit "Moves Like Jagger."

The last time she felt so inspired, the result was 2002's Stripped-a creative breakthrough that helped distance Aguilera from her teen-pop peers and produced memorable hits like "Beautiful," "Dirrty" and "Fighter."

Due Nov. 13 on RCA, "Lotus" refers to the "rebirth" Aguilera underwent both personally and professionally, opting not to work with longtime songwriting partners like Linda Perry in favor of such newer collaborators as Alex Da Kid, Sia, Candice Pillay and even pop maestro Max Martin, on first single "Your Body," which hit radio and iTunes last week and bows at No. 33 on Billboard's Mainstream Top 40 chart this week.

Like on Stripped, Aguilera dips into many genres-from dance-pop on "Your Body" and "Make the World Move" (a duet with fellow "Voice" coach Cee Lo Green), piano-driven power ballads ("Sing for Me," Sia collaboration "Blank Page") and rock-tinged empowerment anthems ("Army of Me," "Cease Fire"). The album even opens with a quick sample of M83's "Midnight City" on the title track, an experimental table-setter where Aguilera resolves to "leave the past behind/Say goodbye to the scared child inside."

Alex Da Kid, who first teamed with Aguilera for 2010's "Castle Walls" on T.I.'s No Mercy, worked with Aguilera on several Lotus cuts with songwriter Pillay, many of which were recorded at her home studio. "I've worked with big and smaller people, and the more established people can get stuck in their ways and say they're not open to critique," Alex Da Kid says. "She definitely had a strong opinion, but she'll go with the best idea in the room. That's really rare for someone that's had so much success."

With Aguilera more or less based on the West Coast for the entire period leading up to Lotus' release to finish taping the current season of "The Voice," that means an aggressive Los Angeles-based promotional schedule during the next few months-with expected stops on "The Tonight Show With Jay Leno," "The Ellen DeGeneres Show" and "Jimmy Kimmel Live!" as well as prominent use of "The Voice" to premiere the video for "Your Body" and a performance during album release week.

"Nobody knows better than Christina that success doesn't come from simply having the voice, but from believing and trusting in that voice," "Voice" producer Mark Burnett says. "That knowledge and experience makes her an incredibly nurturing coach, and one who not only challenges her artists, but encourages and inspires them to challenge themselves."

"The Voice" is winning the music-competition show race and beating "The X Factor" in the ratings. But as the show shifts into full-year production, the singer confirmed that she would be taking a break for season four, set to air next spring, with Shakira filling in her chair and Usher taking that of Cee Lo Green. She's anxious to go back out on the road for the first time since 2007's Back to Basics tour, having canceled 2010's Bionic tour due in part to poor ticket sales. "It's been a joy to be a part of other people's journey, to be able to inspire and be a part of new singers coming up in this business," she says. "But I was starting to get really worried and concerned that I wouldn't have the time to go and be an artist again.

"Mark made it very clear that these chairs are always our chairs," she continues. "He said, 'I understand the only reason the show's going to work is if it doesn't get stale.' And he totally understood that I needed something to fulfill my creative soul, and said, 'This chair will always be yours to come back to whenever you do what makes you the best.'"

However long Lotus keeps her away from "The Voice," it likely won't be permanent. "I'll probably be back. I just need to do my thing for a minute, then I can come back and be that much better of a coach. I just need a second to get back to me." 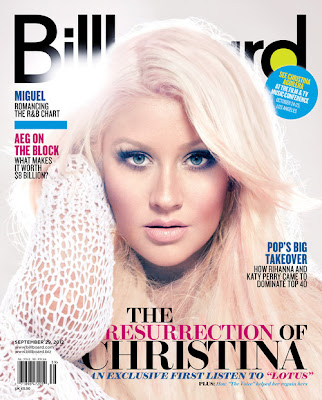 Billboard spoke with Aguilera -- who's keynoting the Billboard/Hollywood Reporter Film & TV Music Conference, to be held Oct. 24-25 -- on the eve of a live Twitter Q&A where she officially announced the details around "Lotus. "Lotus" is an evocative title for your new album, given the events in your career and personal life during the past two years. What does that name signify to you?

This album represents a celebration of the new me, and to me the lotus has always represented this unbreakable flower that withstands any harsh weather conditions in its surroundings, that withstands time and remains beautiful and strong throughout the years. Once I could start writing my own songs, beginning with Stripped, I tried to infuse as much as I could to promote strength and inspire people with that message. And now I'm at a place at 31, where the last time I felt this way was when I was 21 with Stripped and I had a lot to say and a lot to express.

Some of the songs on Lotus are thematically similar to "Stripped," too. Was that intentional?

Absolutely. There's a song called "Army of Me," which is sort of a "Fighter 2.0." There is a new generation of fans from a younger demographic that might not have been with me all the way but that watch me on the show now. I feel like every generation should be able to enjoy and have their piece of "Fighter" within. This time, the way it musically came together it just felt right for this time and this generation. There's always going to be a fighter in me getting through some obstacle and some hurdle.

"Lotus" is also a return to putting your vocals front and center in a way that you didn't always do on Bionic in 2010. What did you learn from that experience?

With Bionic I fully went in there with [the idea], "I'm going to experiment and not be commercial or pop." I wanted to play with different sounds and textures of my voice while bringing an electronica feel to it because that's what I was listening to a lot at the time. And it was a blast.

Were you disappointed with how it was received?

I can proudly say it was ahead of its time, to be honest. It wasn't so commercialized. You had to really be a music lover, be a true fan of music and the love of being open to really appreciate that record. It's just a special piece in my body of work that will forever live on. The older the record gets the more people will come to appreciate it actually and check it out.

How has your experience with "The Voice" influenced you as a performer?

Seeing all the singers, you really come face to face with a lot of people-my teammates especially this season that you'll get to know-that are predominantly younger. That's inspiring, because they come up to you and they're such big fans and they share with you what song touched them the most and how they had to learn every single ad lib and dissect it. As a vocalist it brought me back to, "Yeah, that's what I used to do to my Whitney Houston record and my Mariah Carey record and my Etta James record." It brings you back to a place where it becomes your personal responsibility to infuse the next generation with more information about learning every intricate note. That's why a song called "Sing for Me" is special song. It's one of those singer's songs where if you're not a vocalist you can't mess with that song.

"Your Body" marks your first time working with Max Martin, which is surprising to a lot of people given the teen-pop era where you got your start.

[laughs] Max is legendary in the business. He's known about me but we haven't crossed paths. I think when I came in you heard his name with Backstreet Boys, 'N Sync, Britney Spears -- those records were the kind I wanted to stray apart from. If you look at what I did in the past [after my debut], I always try to do things that will challenge me and challenge the listener, too. Could this have worked 10 years ago? I'm not sure. It's taken us a decade in the same business and watching each other from a distance, so for us to now come together and respect each other's work ethic and how we like to be heard and making a marriage out of it, I think "Your Body" is the best culmination of that.

You've expressed interest in taking a break from "The Voice" in the near future. When might that open your schedule for a tour?

We're still trying to figure that out. My fans do deserve to see me back out on the road. It'll be exciting for me. The road is a lot of work. I want to make sure the timing is right and that I'm fully ready to go, otherwise I would have to pull tickets if I'm not feeling it. I want to press the fact that I want to be feeling it before I go out.

Going back to the current season of "The Voice," what's been exciting for you so far?

I'm actually very excited about this season in particular. It's absolutely the most young and full-of-hungry-energy group we've had yet-this little next generation of future pop stars. Last year I had a different team as far as different genres, but this year it so happened to come together that they were all pop.

One of your contestants from last season, Chris Mann, will be the first season-two alum to release an album this year. Will you be involved with that project?

Absolutely. He's working with [Front Line Management Group consultant] Ron Fair, the man who signed me and is still a very, very dear friend of mine. I know he's in totally safe hands and in great hands musically. Ron Fair really gets it and gets him. One of the songs was sent to me for my participation and I said, hands-down, "yes." It's a beautiful song, the way he's expressing himself on the album-his tone, his richness, his soul. He's not overdoing it, just coming through strong, clear and rich. I'm very happy for him.

Beyond the technical aspects of executing a melisma, what are some career pointers you've been able to hand down to your own artists on "The Voice"?

A lot of these kids are coming from their own kinds of dance and arts schools, which is just like what the Mouseketeers was for obviously me and Britney and Justin Timberlake and Ryan Gosling-need I say more? We all come from that training camp mentality, but then it was a matter of us to be able to absorb everything, take it all in and now throw it all away. That's what I'm trying to teach those kids. Everything can't be so structured, so learned or taught. You guys have an individual self in all of you.

Speaking of Britney, will you be watching "The X Factor"?

[Laughs] I have no time to even watch my own show. So there's your answer.