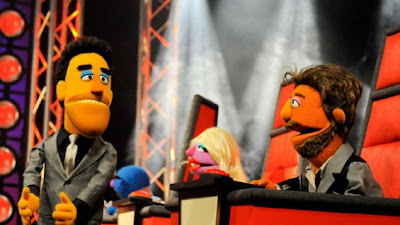 The Voice will appear on TV in a wild new way in September.

Sesame Street will present a spoof on the NBC singing competition when it returns to PBS this fall.

“Finally, a singing competition that’s entirely about your voice, no distractions and no cheap gimmicks,” says muppet-Daly, before being hit by the rotating chair.

While the clip is entertaining enough, it does bring up one important question: Where is the Adam Levine puppet? Sesame Workshop, the nonprofit educational organization behind Sesame Street, did not immediately return THR’s request for more information on the Levine-less clip.

The puppets for Daly, Aguilera, Green and Shelton are pretty accurate, with Aguilera glammed up in a sparkly dress and Green holding his pet cat.

Sesame Workshop recently presented another timely spoof, with Cookie Monster singing his own version of Carly Rae Jepsen’s smash hit "Call Me Maybe.” The song was called "Share It Maybe."

NBC’s The Voice, which received its first Emmy nomination in July, will return for its third season on Monday, Sept. 10, at 8 p.m. ET/PT. Sesame Street returns for its 43rd season on Sept. 24 on PBS Kids.

Watch the Sesame Street clip below.
[SMART-PHONE FRIENDLY]
Source: THR
Posted by AGUILERA ONLINE™ at 9:02 AM