[POLL] CHRISTINA AGUILERA VS. KHLOE KARDASHIAN: WHO WORE IT BETTER? 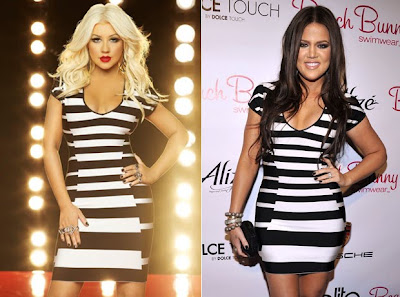 After beating one Kardashian in a fashion faceoff, we decided to pit The Voice’s Christina Aguilera against Khloe Kardashian for a second battle round.

The pop diva wore this 2010 Herve Leger black and white striped dress in the new promo shot for The Voice Season 3. We love how the form-fitted ensemble accentuates Xtina’s sexy curves, and we think she looks pretty flawless.

But back in April 2010, Khloe Kardashian wore the same dress to the Beach Bunny Swimwear’s grand opening party.

Khloe and Christina have similar hourglass figures, but who wore this dress best?