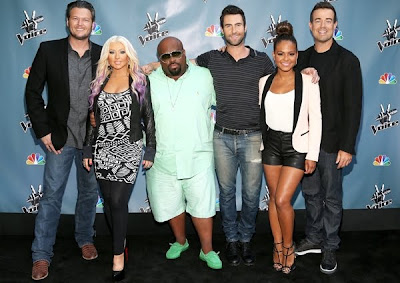 Cee Lo Green, Blake Shelton, Adam Levine and Christina Aguilera – all four coaches of The Voice – joined producer Mark Burnett, host Carson Daly and the show's social media maven Christina Milian for a press conference last night at Burnett's Malibu home. Looking out at the panoramic view of the Pacific Ocean, Levine quipped, "So this is what reality TV buys you."

That, or maybe just knowing what makes for good TV. And Burnett and his team have demonstrated a knack for spotting opportunities. Last season there was shock among fans when singer Jesse Campbell, one of the favorites to win the title, was eliminated by coach Christina Aguilera. Even her fellow coaches expressed their disbelief.

This season, which starts September 10th, they'd be able to do something about it, thanks to a new element called "the Steal," which allows judges to pick up a contestant who's been ousted by another coach. Journalists got a sneak peak at a recently taped battle round between two of Green's competitors, who each delivered a smoking rendition of Mariah Carey's "Vision of Love." As soon as Green carried out the unenviable task of choosing just one, the other coaches hammered on their buttons and made their pitches to bring the loser onto one of their teams, just like they do in the battle rounds. Judges can only pick two additional team members, which will lead to a new cycle of the show called "Knockout Rounds," where the teams will pare down before beginning the live episodes.

The new opportunity for poaching has added a lot to the show, the coaches told Rolling Stone. "It’s nice to throw those elements in to kind of spice things up," Levine said. "Those things definitely help keep it fresh for us."

It also adds more pressure, Shelton said. "There’s nothing that’s more nervewracking than knowing, 'Okay, both these singers did really good and I gotta pick one and I know damn good and well one of these other three are gonna steal the person I don’t pick,'" he said. "There’s a chance that person may go on and win this and that’s gonna make me look really stupid. That definitely goes on in your mind. As an artist and somebody on television I have enough of an ego that I don’t want to look that stupid. I want to look brilliant."

Ultimately, though, he recognizes it's great for the show and viewers. "It’s going to be so exciting for people watching at home," Shelton said. "Here’s the truth, as much as we want to sit up here and talk about how different this show is, and it is, what people love the most is those damn buttons. People love to see us hit those buttons and somebody’s life is changed at that moment. This is another way of changing somebody‘s life later on in the show, where they think all hope is lost, they’re going home, the next thing you know the button gets pushed and they’re right back in the game again. That’s pretty exciting."

The new components add another element to what Levine, Aguilera and Shelton call "the best season yet." Only Green holds out on that, saying, "A few memorable things have happened thus far, but season three isn’t completed yet, so I don’t know if this is the favorite season yet."

For the four coaches, though, the biggest strength of this season is their bond. In the first clip shown at the junket, the four are seen performing the Rolling Stones' "Start Me Up," and they resembled a band, much more than they did in the combined performances of the first two seasons.

What helped meld them into a tight, family-like unit is the way all four work with contestants, Aguilera said. "Over time we see how each of us react as coaches, giving such heartfelt advice and attention to these up-and-coming young fresh talents and it’s so nice to see," she said. "It’s refreshing because we came into it not wanting to knock anybody down and I think we all respect that. We might take shots at each other, but never the talent. So there’s just a magic, there’s a bond there that’s unbreakable at this point."

Shelton concurred, recognizing the quartet is now joined together by the success of the series. "We’re always going to be connected to each other through this show," he says.

He admitted there have been some rough moments, like any family. "We’ve been through a lot of shit with each other, no doubt," he said. "We’ve had fights, ups and downs and weird moments and fuck-offs and all that stuff. But all friends go through that I think and you either go through it and you never speak to each other again or you go through it and your relationship is even stronger. We didn’t have to come back together, but we did, and our relationships are stronger."

Levine agreed that the coaches have left the rockiest moments behind them. "We are getting along better than we ever have and I guess our energies have all congealed and we’re very, very close at this point," he said.

The show will run this year in both the fall and spring seasons, which could result in one or more of the coaches having to take a sabbatical to go on tour. Although Burnett said the coaches have their "chairs for live," the assembled journalists were keen to speculate on who the replacement coaches might be. Green shut down the speculation while nicely summing up the bond among the current four.

"For me, there’s nobody comes to mind that can replace my Blake, my Adam and my Christina," he said.