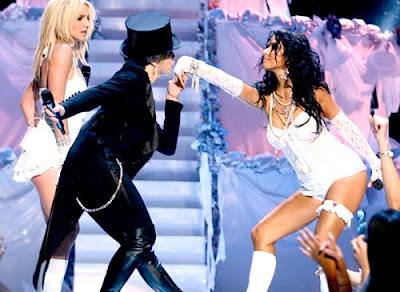 The site says the pop trio, who famously locked lips during a racy performance at the MTV Video Music Awards in 2003, “could very well” reunite onstage when Madonna’s tour hits Los Angeles this fall.

THR reports, “According to the Twitter feed for the singer’s latest album, MDMA, Aguilera will appear at Madonna’s concerts in Los Angeles on Oct. 10 and 11 for a ‘special performance,’ while Spears will ‘attend’ the show on the 10th.”

However, as exciting as it would be to see the three stars perform together again, a reunion is not in the cards just yet.

A rep for Madonna tells Gossip Cop it’s “not true” that Aguilera or Spears will join her onstage during her tour, explaining that the MDNA Twitter account which started the rumor is “a fake.”

And reps for Spears and Aguilera both tell us that the reunion report is FALSE.