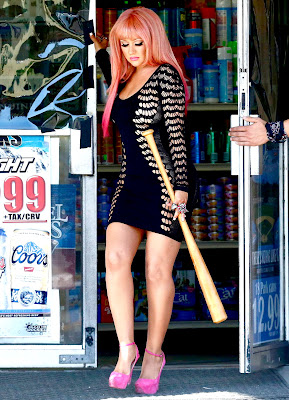 As a general rule of thumb, it's probably best not to mess with a woman in sky-high pink heels and a matching pink pick-up truck.

And that rule is doubly true when the lady in question happens to be pop diva Christina Aguilera.

The veteran crooner looked ready for battle on the set of her new music video for single "Your Body" last week as she toted a baseball bat over her shoulder and she stalked around the set in impressive hot-pink pumps.

The 31-year-old singer also made a bold fashion statement with a skin-tight black dress that left little to the imagination with a perforated pattern that revealed a nude-colored layer underneath.

Aguilera also donned a dip-dyed pink wig to complete her ensemble, along with a collection of bold rings on both her hands.

"Your Body" will be the first single off Aguilera's as-yet-untitled seventh studio album, set to be released this fall.

The curvy singer has received her fair share of criticism in the past over her fluctuating figure, and opened up about her struggles at a Television Critics Association conference earlier this year.

"I've been on all spectrums," she told reporters in January. "I've been in this (business) for a long time. I came out on the scene when I was 17 years old.