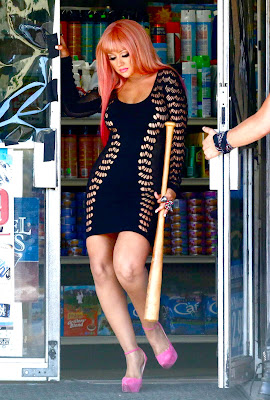 Christina Aguilera was spotted on the set of her "Your Body" music video looking feisty and hot. Xtina was photographed in a long pink wig with blunt bangs, hot pink heels and a body-hugging dress.

Her look in the video certainly matches the Max Martin-produced track's sexy vibe where she belts "I am a freak, I'm disturbed/ So come on and give me your worst/ We're moving faster than slow/ If you don't know where to go/ I'll finish off on my own."

In her hot little black dress, Aguilera was swinging a baseball bat around, and also driving around in a baby pink pickup truck.

In some of the shots she's chatting with a model-looking guy, but it's hard to tell if he's the video's love interest or just someone associated on the production end. She previously shot some of the video on August 20 when she tweeted out a photo of her leg in fishnet stockings. Her foot, in the hot pink shoe, rests on a green suitcase.

"Your Body" is the lead single off Aguilera's next record, her first since 2010's Bionic. For it, she's rumored to have hit the studio with a number of producers, writers and artists including British production team Xenomania, who have worked with Cher, Kylie Minogue and the Wanted, as well as her "The Voice" co-judge Cee Lo Green.

She has yet to confirm when the album will drop, but did explain to Rolling Stone earlier this summer that it shows her evolution. "I'm one that likes to collaborate. I love feeding off the creative energy, and it only makes me better," she said. "I'm on a continual path both personally and professionally. All-around, it's my goal to better myself as a person and an artist, and the show is one of those contributing factors and the guys are great friends at this point. It's fun collaborating with them at this point." 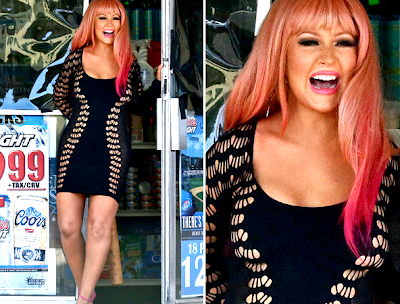