[NEWS] 9 THINGS WE LEARNED FROM 'THE VOICE: SEASON 3' JUNKET 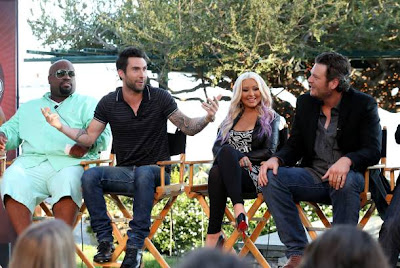 NBC invited reporters to the beachside Malibu estate of executive producer Mark Burnett Sunday night to unveil the creative twists coming to the third season of The Voice, which premieres on September 10. Coaches Christina Aguilera, Cee Lo Green, Adam Levine, and Blake Shelton were on hand to talk up the show’s new “knockout rounds,” and share their thoughts on Britney Spears and why The Voice has yet to launch a pop star. We also got a sneak peek of the latest coaches’ medley (hint: it moves like Jagger). Here’s what we learned: