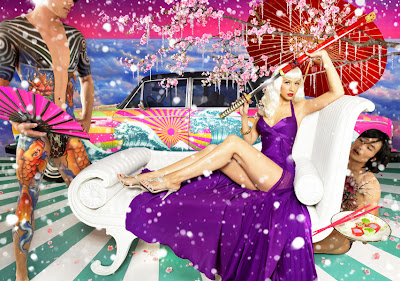 Choosing 10 of our favorite Christina Aguilera songs wasn't the easiest task in the world. With her powerhouse vocals, it was hard to limit the list to just 10, but somehow, we did it. Now a veteran of the music industry, she's arguably considered the Voice of Our Generation, and leaves a legacy of hits behind her. Christina Aguilera songs should be in a genre of their own, considering how hard is is to match her top-notch voice and range — which is why we're paying tribute to XTina with what we think are the Top 10 Christina Aguilera Songs she's released thus far.

Everything about this Christina Aguilera song was so amazing, we're still raving about it today. 'Come on Over Baby' was XTina's fourth and last single off of her debut album. It peaked at No. 1 and spawned a Spanish version of the song titled 'Ven Conmigo (Solamente Tú)' — to which we know all the words to as well. Go bilingual us! Anyway, not only is the song great, we also remember the video very fondly, mostly because we wanted her bellybutton crystals and blue low-rise pants more than anything in the world.

'Dirrty' was the controversial track of the year back in 2002. XTina's good girl image did a complete 180 when it was released and her sexuality was brought to the forefront. Despite being called “desperate and shrill” by Entertainment Weekly, 'Dirrty' was nominated for Best Pop Collaboration with Vocals at the 45th Grammy Awards. The video infamously featured Aguilera in a boxing ring with a–less chaps and darker makeup. Fashion choices and opinions aside, however, we still get down to this Top 10 Christina Aguilera song.

'I Turn to You' is the first ballad on the list of our favorite Christina Aguilera songs. This track continues to prove how stunningly the girl can belt, but color us surprised when we learned that Diane Warren wrote the song in 1996 and it was first recorded by R&B group All-4One for the 'Space Jam' soundtrack — Aguilera actually covered the song for her first album! Major. Shock. The song itself wasn't too promoted in the U.S., but internationally, the single remained in the No. 1 spot for the first month of its release. It became an international hit and sold over 1.8 million copies worldwide.

'Ain't No Other Man'

This song was a major turning point in Christina's career. Featured on her 'Back to Basics' album, her first album release in four years (and one of our faves), the song reached No. 1 in 10 countries and received critical acclaim. Her voice was also praised in this song, with many critics considering it her greatest vocal achievement. The tune also featured a change in music style — from pop to funk and soul, producing that '30s and '40s vibe — and the song earned her a Grammy for Best Female Pop Vocal Performance. We loved the heavily jazz-influenced track and consider this one of her best yet.

'What a Girl Wants'

'What a Girl Wants' was released in 1999 and was Christina's second single off of her debut album. The song became her second consecutive No. 1 single, and her vocals on the song were compared to Mariah Carey's. While we prefer this single, Aguilera herself said otherwise. “I was held back a lot from doing more R&B ad-libbing,” she said of the song. They clearly wanted to make a fresh sounding young pop record and that's not always the direction I wanted to go in.” Well, the song spent 24 weeks on the Billboard Hot 100, so despite how she felt about it, the public clearly loved it. As did we.

Written by Aguilera and Scott Storch, 'Fighter' is an edgier song that features heavy elements of rock music with Dave Navarro on guitar. This Christina Aguilera song became the singer's ninth U.S. Top 20 single and even became the anthem of the 2003 NBA Playoffs. The video reflects the empowering lyrics, as a black-haired Aguilera grows stronger and more thick-skinned against those who try and bring her down. The song basically became every girl's anthem at the time and even we channel Aguilera when we dance to the song in our hip-hop class. Don't judge us…

It was the note that changed Christina Aguilera's life. In order to record the song 'Reflection' for the soundtrack to 'Mulan,' she had to hit a high E above middle C — if she did it, she knew it'd land her a record deal. She practiced by singing Whitney Houston's 'Run to You,' which featured the same note, and it looks like practice made perfect because Aguilera nailed 'Reflection' and became a superstar shortly thereafter. While the lyrics itself aren't that memorable, it's Aguilera's delivery and the notes she hits that give us goosebumps.

We can't say enough how much we love 'Candyman.' The third single off of 'Back to Basics,' it was critically-acclaimed for its uptempo beat and swing-influenced sound. Drawing inspiration from the Andrew Sisters' 'Boogie Woogie Bugle Boy,' Christina brings forth a retro feel but still keeps it contemporary with the sexier tone and sing-along lyrics. We also love the '40s-inspired video, featuring Christina as Rosie the Riveter and as old Hollywood starlets like Judy Garland and Betty Grable. The choreography and costumes are also amazing, and well, three Aguileras are way better than just one!

'Genie in a Bottle'

Do you remember the first time you heard 'Genie in a Bottle' back in 1999? Were you in the car with your mom, saying, “Who's this girl trying to be? Britney Spears?” We were! But this Christina girl quickly grew on us and we soon shared a love for both singers. This track was Christina's debut single and with over over 7 million copies sold, 'Genie in a Bottle' became a best-seller and obviously put Aguilera on the map. And after we saw the video and saw her laying on the beach in her cutoff shorts and white crop top, for the first time in our young lives, we wanted to be Christina and not Britney.

'Beautiful' is our favorite ballad by Christina and is said to be one of her strongest and best singles ever. It tells the story of individuals fighting against bullies, low self-esteem and insecurity issues, and even earned Aguilera a Grammy as well as a GLAAD Media Award for a positive portrayal of gay and transgender people. It has been culturally embraced given its positive message and is definitely one of the most memorable and greatest Christina Aguilera songs to date. Despite the many artists who have covered the song, including Elvis Costello and Chaka Khan, no one sings it like our Christina.

Source: PopCrush
Posted by AGUILERA ONLINE™ at 12:52 AM

Email ThisBlogThis!Share to TwitterShare to FacebookShare to Pinterest
Tags: AINT NO OTHER MAN, BEAUTIFUL, CANDYMAN, CHRISTINA AGUILERA, COME ON OVER BABY, DIRRTY, FIGHTER, GENIE IN A BOTTLE, I TURN TO YOU, REFLECTION, WHAT A GIRL WANTS