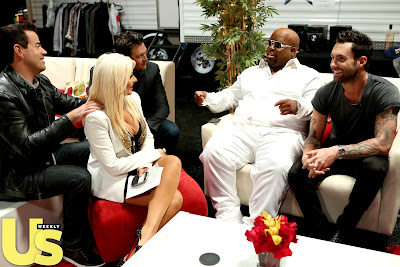 Last season on The Voice, it was a whole lot of he said, she said drama for Adam Levine and Christina Aguilera, but as the coaches come together to begin work on season 3, Levine tells MTV they're on much better terms.

Indeed, in an Us Weekly exclusive pic taken last week in L.A., Aguilera and Levine happily bonded alongside host Carson Daly and fellow mentors Blake Shelton and Cee-Lo Green.
"We bickered a little bit in the beginning, to be totally truthful, we had a little bit of a rough start, just kind of all getting to know each other," Levine, 33, reasoned to MTV of his bond with Aguilera, 31.

On The Voice's May 9 season finale, the duo nearly came to blows when Levine's contestant, Tony Lucca, covered Jay-Z's "99 Problems," a song that Aguilera (Lucca's former Mickey Mouse Club costar) declared to be "derogatory." During a heated exchange, Levine challenged Aguilera, explaining that the lyrics weren't meant to refer to women, but life in general.

"I love her, she's the best, and we're having a fantastic time as of late on the set," Levine -- who will soon appear on season 2 of Ryan Murphy's American Horror Story -- says.

Source: Us Weekly
Posted by AGUILERA ONLINE™ at 2:04 PM