Songstress Christina Aguilera and reality star Kim Kardashian are no strangers to celebrity smackdowns. Xtina and her powerful voice went head-to-head with her fellow judge Adam Levine on the recently concluded season of "The Voice." Kim, meanwhile, was recently dissed by "Mad Men" star Jon Hamm, when he said that she's an example of how "stupidity is certainly celebrated" in our culture. The "Keeping Up With the Kardashians" star retorted via Twitter that, "Calling someone who runs their own businesses, is a part of a successful TV show, produces, writes, designs, and creates, 'stupid,' is in my opinion careless." Yikes! Today, however, Kim and Christina take on each other, after both stepped out in the same form-fitting, orange Roland Mouret dress less than one month apart. It's time to decide ... who wore it best! 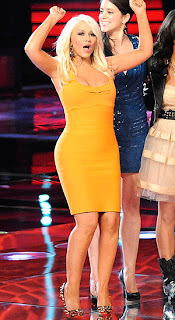 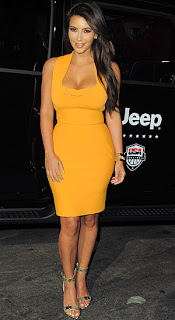 Xtina, 31, donned her dress first during an episode of "The Voice" on April 3 with some blingy heels and big earrings. The "Not Myself Tonight" singer wrote about her style on her blog: "Our glam look all revolved around the color of my dress. I thought it was fresh and bright and I wanted to be sure my hair and makeup complimented the color rather than clashed with it."

Kim, 31, sported the frock as she attended the 2012 Jeep Wrangler Unlimited Altitude Edition event in L.A. last month. The reported current lady love of Kanye West, who also wore her locks down, wrote on her blog that she accessorized with Celine cuffs, a Lorraine Schwartz bracelet, and Givenchy heels.

The shape of this dress is an excellent choice for both women, since it really shows off their va-va-voom figures. Christina's look is also fun — love those shoes! — like she's ready to hit the Hollywood party scene! Kim's, on the other hand, is more sophisticated, thanks to simple makeup aside from her lush eyelashes. The choice, then, comes down to color, which is clearly a more flattering shade for one of the women because of her dark hair and complexion. For me, that woman is... Kim. Do you agree?

I would have to disagree with you on that one Raechal Leone Shewfelt, Christina rocked the shit out of this dress. You should have seen her in person. Your bitch ass would have been drooling.

Posted by AGUILERA ONLINE™ at 7:11 PM