[NEWS] 'THE VOICE' SEMI-FINALS: 9 THINGS YOU DIDN'T SEE ON TELEVISION 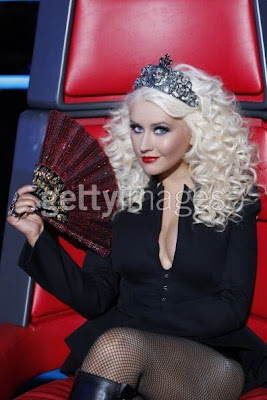 On Monday, all eight of the remaining contestants of The Voice performed. The stakes have never been higher; After Tuesday, only four contestants will move on to next week’s finale.

For the first time this season, contestants from all four teams performed on the same show. With all the weaker links weeded out in past weeks, only the strong remain, giving viewers one great performance after another.

On TV, you saw Chris Mann return to opera, Lindsey Pavao present a soft and sweet sound, and Juliet Simms rock the house with her out-of-this-world performance of “It’s A Man’s World.” But what didn’t make it onto the cameras?

The Hollywood Reporter attended the live show to bring you the behind-the-scenes details that the home audience didn’t get to see.

Here are 9 things that went down when the cameras weren’t rolling:

1. “Over” take two. Blake Shelton performed his newest single, "Over," for the first time on TV. The performance was pre-taped before the live show. On his first attempt, Shelton’s mic wasn’t working, so they had to restart. Shelton performed the full song twice.

2. The audience was put to work. You may think sitting in the audience is all fun and games, but on Monday night, those lucky people standing in the pits around the stage were put to work. Glow rings were handed out before Erin Willett’s performance of “Without You,” and electric candles were handed out before Mann sang “Ave Maria.” The pit people were instructed to wave these items around only during the contestant’s performance. However, of course, there was no way to control that many random people, so some people were waving around the candles during Carson Daly’s introductions. Tsk, tsk.

3. A gentleman and a fanny. Christina Aguilera, wearing a pair of killer knee-high boots and a little leotard dress item, went on stage after both of her teammembers’ performances. Each time, she was helped back down the stairs by fellow coach Shelton. The second time, she waved her butt in the air for an extra second in a little joke to Shelton.

4. School friends. During a commercial break, the warmup guy talks to a trio of eight year olds. Who are they fans of? Adam Levine. Why? It turns out they go to the same elementary school that he did. The Center for Early Education is based in West Hollywood, and Levine was a student there (along with Jake Gyllenhaal). Levine gave the girls a friendly wave from his coaches’ chair.

5. Fancy pants. The most elaborate stage setup award went to Mann. It took more than two dozen crew members to set up the candle display that went along with his “Ave Maria” performance.

6. Photo bomb. Viewers may have noticed Willett and Mann in the background of Christina Millian’s interviews. The duo planned a subtle and funny photo bomb during one of her interviews after first doing it in rehearsals. After the show, Willett told THR that she was “in a funk” after she got off stage from her performance because she had gotten so emotional. “I looked at Chris, and he was like, ‘Ok, we’re doing what we did in rehearsal and we’re going to have fun.’ He kind of brought me out of my funk a little bit,” Willett said.

7. Boots not made for walking. Aguilera’s boots got plenty of time in the limelight. When the camera wasn’t on her, she’d rest her feet up on her desk, with her knee-high boots displayed proudly for everyone to see.

8. Not so hot. THR has already described the excruciating heat that seems to be a permanent resident in the studio where the show is shot. But, by some miracle, the stands were not unbearably hot on Monday.

9. Daly’s daily motions. Before the cameras start rolling on the host, he’s got a few different motions he’ll go through. There was a lot of foot tapping to the music, a little air guitar, and – at one point – the robot.

Source: THR
Posted by AGUILERA ONLINE™ at 1:25 AM