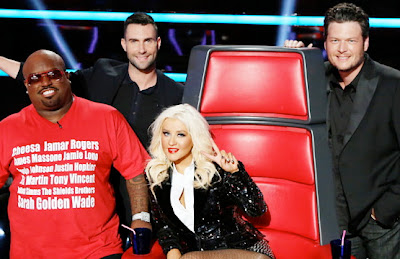 The hit network made some shocking choices, including adding Christina Aguilera, Adam Levine, Blake Shelton, and Cee Lo Green‘s The Voice to the fall lineup on Monday and Tuesday nights, according to Deadline! The Voice had previously aired as part of the Spring lineup.

Absent from the schedule are Smash and The Biggest Loser. Smash is expected to have a mid-season premiere.

New shows on the schedule include Go On, Ryan Murphy‘s The New Normal, Animal Practice, Revolution, Chicago Fire, and Guys with Kids.