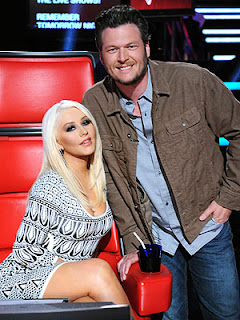 Blake Shelton chatted with Jay Leno Wednesday night on the Tonight Show, and Scarlett Johansson was on the couch next to them.

When the conversation turned to Shelton living in L.A. -- which he and wife Miranda Lambert have done for two months now, he said -- he offered that people usually ask him fellow Voice coach Christina Aguilera's "boobs are as big in person" as they appear on camera.

"Are they?" piped in Johansson.

"Yes, they are, as a matter of fact," confirmed Shelton. "They deserve their own chair."

Leno then read one of such gems: "I'm so drunk right now I just walked in the aiport, pulled my pants down and shouted this is my only carry-on and I need a hand."

Shelton, who likes Bacardi rum and Crystal Light, has laughed off the drunk tweeting for awhile now. In Parade last August, he said, "Yeah, I drink a lot, but I'm not drunk every night."

Source: USA Today
Posted by AGUILERA ONLINE™ at 8:17 AM