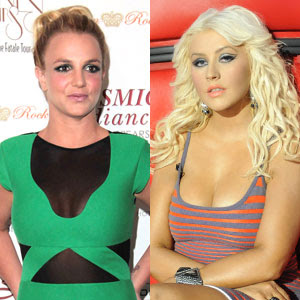 Remember the days of Christina Aguilera's "Genie In a Bottle" versus Britney Spears' "Hit Me Baby One More Time"?

Oh, the memories…And now, 13 years later, two of pop's biggest sensations (and former Mouseketeers) are going up against each other again. But this time it's not for placement on the Billboard charts—it's a full-on ratings war!

In case you haven't heard, Brit's thisclose to signing a $15 million contract to become a judge on The X Factor, so she'll be up against The Voice judge on the boob tube. But will Brit-Brit be able to deliver in the same sassy styling as Ms. Aguilera?!

"Let's face it, I'm no stranger to controversy and I'm OK with that," Christina said on last night's episode of The Voice.

And it's that kind of 'tude Xtina's been sporting all season that has made her such a fab judge. If Adam Levine weren't so damn hot, we'd probably pick her as a coach—ya know, if any of Team Truth could carry a tune.

Case in point? On Monday, gal shocked audiences when she cut one of her team's frontrunners (Jesse Campbell); then on Tuesday, once again made a controversial pick, choosing Lindsey Pavao (aka the Kristen Stewart of The Voice, don't you think?) over her competition.

Not to mention sending the blogosphere into a tizzy by supposedly giving Justin Bieber a be-yotchy look.

But that's what we think makes the curvy blonde bombshell so valuable—she isn't afraid to totally piss people off. "I'm fearless in the face of what I believe and I will defend every action that I take," Christina said during the show Tuesday night.

And she's not afraid to critique either. Heck, her go-to motto is basically "It was kinda pitchy, I'm not gonna lie." And that prissy purse of her lips tells you exactly how Xtina feels about any particular performance. Love.

As for Brit? It's no secret we're obsessed with the reigning princess of pop, and we were overjoyed when we heard the Femme Fatale is so close to becoming a judge. (B.S. on our TV every week?! Hallelujah!)

But we think Brit's going to have a far less lethal approach to judging than Christina—think the Paula Abdul or Jennifer Lopez type—sweet, innocent and totally complimentary. We have a feeling Britters won't be making those controversial calls that will leave America up in arms.

Just look at reports that Brit reportedly put a "no bullying" clause in her contract, insisting she wants to be the judge who will nurture new talent and she'll leave the harsh words to Simon Cowell. Bummer, we'd have loved to see Britney unleashed.

For now, we have a feeling we'll be bigger fans of Christina's tough-love 'tude. But we adore Ms. Spears and will definitely reassess once she hits the small screen. Because, either way, we're sure Britney will find some way to keep people talkin'.